STOCKHOLM: Jakob Abrahamsson and CG Anderson have purchased NonStop Entertainment from Turner Broadcasting. Abrahamsson was previously the director of distribution and acquisitions at NonStop Entertainment. He will now serve as CEO of the company. He commented of the acquisition: “We’ve had a great run under the Turner umbrella with some of our biggest successes, and …

The leading source of information for the international media business.
Previous UKTV Strikes Comedy Gold
Next Davina McCall to Host ITVâs This Time Next Year 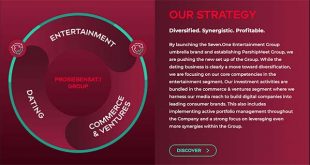 Fourth-quarter revenues at ProSiebenSat.1 Group were up 11 percent to €1.5 billion ($1.8 billion), including a 3 percent gain in entertainment ad revenues.