U.S. Consumer Spend on Streaming to Top Pay TV in 2024

In 2024, U.S. consumer spend on streaming services will top outlay on traditional pay-TV services, according to new research from Strategy Analytics.

The report, U.S. Subscription TV Forecast, indicates that consumer spending on traditional pay TV dropped by 8 percent last year to reach $90.7 billion and will decline further to $74.5 billion in 2023. In contrast, consumer spend on streaming was up by 34 percent to $39.5 billion last year and is set to soar to $76.3 billion in 2024. By 2026, pay TV will account for 40 percent of spending on video and TV services; in 2016 it was 81 percent.

“The revenue picture gives the best illustration of the relative strength of new and old businesses,” said Michael Goodman, director of TV and media strategies at Strategy Analytics. “The fact that viewers are willing to divert an ever-increasing share of their entertainment wallet away from pay TV and towards new internet-based services demonstrates that the future lies with streaming video services rather than legacy pay-TV players. This is a long-term transition, but there is no doubt that the writing is on the wall for pay TV as we have known it for more than 40 years.”

Mansha Daswani is the editor and associate publisher of World Screen. She can be reached on mdaswani@worldscreen.com.
Previous Flintstones Follow-Up Bedrock in Development for FOX
Next Turner Sports Clinches NHL Deal 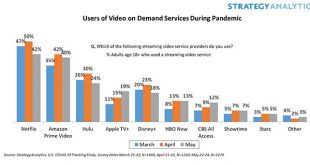