This article originally appeared in the NATPE 2015 issue of World Screen. A number of Europe’s biggest content companies are aggressively expanding their businesses in the U.S. The urge to “Go West” remains a powerful one, judging by the steady flow of European media companies crossing the Atlantic to set up or acquire U.S. production …

The leading source of information for the international media business.
Previous FOX TV Stations to Air Tosh.0 Reruns
Next Paramount Pictures Films to Stream for Free on Tubi TV 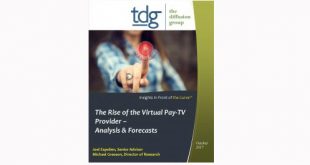 The Diffusion Group (TDG) is predicting that the penetration of live multichannel pay-TV services will decline from 85 percent of U.S. households in 2017 to 79 percent in 2030, as virtual MVPDs disrupt the marketplace.