Caracol’s The Spin Debuts on UnimÃ¡s

BOGOTÁ: Unimás in the U.S. has nabbed The Spin, a series produced by Caracol Television and distributed by Caracol TV Internacional. The title airs on the network Monday to Friday at 4 p.m. The production tells the story of Julian and Eliana, two journalists committed to investigating a network of drug dealers. Marlon Moreno and …

The leading source of information for the international media business.
Previous DIRECTV Latin America to Carry AMC
Next Scripps Launches Food Network Across LatAm on DIRECTV 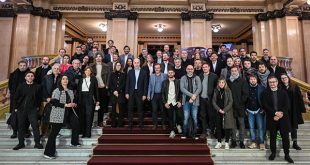 The Ministry of Culture of the City of Buenos Aires has launched a cash rebate program for audiovisual productions developed in the city with foreign investment.