EstrellaTV is getting ready to premiere the third season of 100 Latinos Dijeron, a Spanish-language version of the classic game show Family Feud, on March 23.

Mau Nieto, one of Mexico’s top stand-up comedians, reprises his role as host of 100 Latinos Dijeron. The show has been picked up for a third season and will premiere on Monday, March 23, at 7 p.m.

Nieto said: “The first season I hosted was a very fun experience for me. I adapted quite well to the format and I enjoyed it very much. For the third season, I just hope that our viewers have as much fun watching as we had making the show.”

In 2018, EstrellaTV and Fremantle entered a multiyear co-production agreement to produce and air 100 Latinos Dijeron on EstrellaTV. The series premiered for the first time on EstrellaTV in February 2019 and originally featured actor/comedian Armando Hernandez.

Kristin Brzoznowski is the executive editor of World Screen. She can be reached at [email protected]
Previous LatAm SVOD Subs to Double
Next ViacomCBS Networks Americas Launches Channels on DIRECTV GO 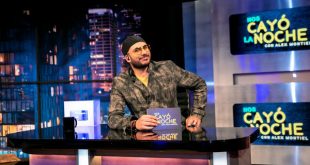 ViacomCBS Networks Americas has launched a number of its global channels, including Nickelodeon and Nick Jr., on the streaming platform DIRECTV GO.