Written by David Elver and directed by Thomas Robins, Written in the Stars is being shot on location in New Zealand. Production is also beginning on The Secret Sauce in Montreal, starring Canadian actors Tori Anderson (Blindspot, Tru calling, You May Kiss the Bridesmaid) and Corey Sevier (North Shore, Lassie, Little Men). Written by Tatiana Krokar, Incendo will collaborate again with director Philippe Gagnon.

In Written in the Stars, when Kelsey’s magazine approves her pitch about a skeptic’s take on love and horoscopes, she is teamed up with Astrology guru Carter. They put their differing perspectives aside to work the story around a local meteor shower festival and soon learn that love really can be written in the stars.

The Secret Sauce follows Laura, a Chicago marketing executive who is sent to oversee a small midwest town cook-off and entice Jim, the local barbecue joint owner, to let her license his family’s secret BBQ sauce. An unlikely friendship between the two slowly marinades into something much bolder and sweet.

Both films are produced in association with Citytv to air as part of Citytv’s Fall in Love Fridays lineup.

Chelsea Regan is the managing editor of World Screen. She can be reached at cregan@worldscreen.com.
Previous MIPTV Spotlight: SODEC/Québec Creates 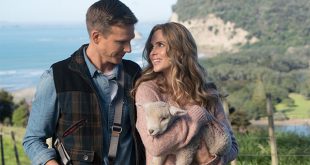 Incendo Starts Filming As Gouda As It Gets

LOS ANGELES: Skybound Entertainment, led by Robert Kirkman and David Alpert, along with business partner Jon Goldman, is expanding its business with the launch of an office in Vancouver.

Bagman
Designed by HattanMedia.com
© Copyright 2021 WSN Inc. All Rights Reserved.
No part of this website can be used, reprinted, copied, or stored in any medium without the publisher's authorization.