The Scottish indie Two Rivers Media has secured a deal with A+E Networks International alum Hayley Babcock and her new company, Hayley Babcock Media Consulting, as it ramps up its expansion into the U.S.

Based in Los Angeles, Babcock will lead Two Rivers’ U.S. creative development, production and business strategy, helping to broaden the company’s scope in the region in terms of both volume and genres of content. Through the consultancy, she will also help drive new partnerships, production deals and other collaborations for Two Rivers.

Babcock, who was previously head of formats at A+E Networks, was responsible for all creative and production aspects of the group’s international format business.

Alan Clements, managing director of Two Rivers Media, said: “International growth is an area of strategic importance to Two Rivers, not only in relation to our commercial success, but also in relation to the future development of, and investment in, our team in the U.K. A direct result of our strategic partnership with All3Media, partnering with Hayley Babcock is an extremely timely partnership for us, as we already have U.S.-based projects underway. Hayley has an exceptional mix of creative and business skills along with a rich global network of contacts. She also has extensive experience developing and producing globally recognized, commercially successful content in the United States and in key international territories. It’s very exciting to have her and her company as our go-to in North America.”

Babcock added: “Two Rivers’ ambition and energy, and the experience of the creative team Alan has assembled, is really impressive. The global market has an insatiable appetite for new stories and new voices, and I’m delighted to work with Two Rivers to extend its reach in the U.S. The company already makes outstanding programming that resonates around the world, and I’m eager to get started on our plan for growth here in the U.S.”

Chelsea Regan is the managing editor of World Screen. She can be reached at cregan@worldscreen.com.
Previous Global Agency Celebrates 15 Years
Next Roku Revives Zoey’s Extraordinary Playlist as a TV Movie 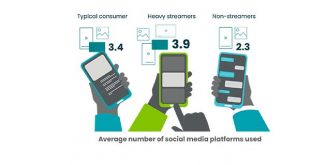 A new report from Conviva has found that word of mouth is the most frequent way consumers discover new content, ahead of advertising, social media and platform recommendations.