For the fourth year in a row, Netflix has ranked at the top of Solutions Research Group’s (SRG) “Must-Keep TV” list.

The top ten, in fact, all remain the same as 2021: Netflix leads, followed by ABC, CBS, Amazon Prime Video, NBC, Hulu, FOX, Disney+, HBO Max and ESPN. This marked a first in 15 years of tracking.

The only major streamer in the survey that didn’t make it to the top 20 or record a significant jump in rankings was Apple TV+, which is ranked 31 in 2022, up only a couple of spots from 33 last year.

Outside of the top 20, AMC, Cartoon Network, A&E, TBS, ION and SyFy all had upward momentum.

SRG’s annual “Must-Keep TV” research is based on 1,400 interviews across the U.S. with consumers aged 12 and older and conducted in late April 2022. This is the 15th annual edition of the research since its inception in 2007.

Kristin Brzoznowski is the executive editor of World Screen. She can be reached at kbrzoznowski@worldscreen.com.
Previous FOX Reveals Fall Schedule
Next KOCOWA Launches on Prime Video Channels in the U.S. 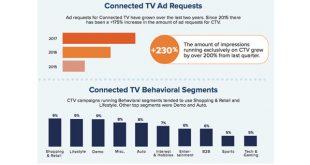 Videology has released its Q4 2017 U.S. TV & Video Market At-A-Glance report, which reveals a 175-percent increase in the amount of ad requests for connected TV in the Videology platform.