Joel Marino is associate editor for World Screen and TV Latina. He can be reached at cjmarino@worldscreen.com
Previous Endemol Shine Group Expands Deal for Candidate-Search Platform
Next Nat Geo Gives Second Season to The Story of God with Morgan Freeman 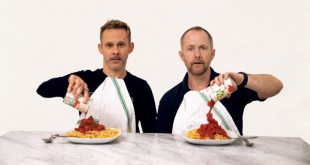 Off the Fence has added Dash Pictures’ Billy and Dom Eat the World, starring The Lord of the Rings’ Billy Boyd and Dominic Monaghan, to its slate.