The British football icon unveiled Studio 99 in 2019 to develop nonfiction programming and serve as a creative agency for brand partners. “I’d looked at Fulwell, companies like SpringHill [LeBron James and Maverick Carter’s company], and it just inspired me,” Beckham said in his keynote. “I’ve been in front of the camera and on sets for the last 25 years. I’ve worked with some great people, I love the creative side. I wanted to be able to create content, which I’ve done for years, but be in control of that content.”

Winston asked Beckham about his decision to embrace social media and use it to share aspects of his personal life. “The good side of social media is you can control your own content and your own narrative. I’ve never been a really open person. I’m a very private person but I like to share what I like. That’s the great thing about Instagram. That’s one of the reasons why the studio side is really interesting to me. I do have a huge following, I work with so many different brands.”

Docs in the works at Studio 99 include a series on Inter Miami, the MLS club that Beckham co-owns. Inside Inter Miami will chart the journey of the new club, which Beckham began pursuing immediately after his retirement from professional football. “It was a big moment that I feel we’ve documented over the years. I always love to watch sports documentaries. Sunderland ’Til I Die, I love that documentary. Watching that documentary inspired me and I got so many great ideas from it. And the All or Nothing series. I’ve played with some of the best managers and some of the best players, that’s what I’ve tried to bring into Miami. We want to compete with the best. We want to be humble. We want to be hardworking. Most importantly, we want to win trophies. Making the documentary is our first big thing with the studio. We have a real opportunity to make some content that is going to be incredible and tell the story the way it was.”

Beckham is also fronting the factual-entertainment series Save Our Squad for Disney+, produced by Twenty Twenty and Studio 99. “It’s something I’m really excited about. I played grassroots football. I was part of a Sunday league team at 7 years old. This show is about giving back. It’s about giving these young kids the opportunity to work with me, to listen to my experiences of when I was their age.”

Studio 99 is also working with Story Films on A Whole New Ball Game, a four-parter for BBC Two, which promises to tell the definitive story of the early days of the Premier League. “It’s about the first decade of the Premiership, really when it became box-office entertainment and the game started to change. The moment when football became entertainment. Sports became truly global with the Premiership. Being part of that and co-producing that makes sense because a) I was part of the Premiership for so many years and b) I love the game.”

Meanwhile, with Matador Content there’s World War Shoe, about brothers Adi and Rudi Dassler, who founded a shoe company together in 1920s Germany but after falling out went their separate ways—with Adi setting up Adidas and Rudi founding Puma, literally on opposite sides of the same street. “I don’t think that story has been told yet.”

Asked if he wanted to do a doc about his own life, Beckham said, “I think now is the right time to do it. It’s such an exciting time in my career, after being a player. There’s so many things happening, so many things have happened. With the announcement of the studio, with the team coming into the league, with the documentaries from the last few years. The Last Dance was incredible; seeing one of my heroes tell his story—you watched it and thought, I remember that, but I didn’t know that was what was going on behind the scenes. Things like that made my mind up to say, this it the right moment to do it. There’s a real momentum in this industry. We’re putting the team together now. We’ve not decided on a director yet. I want to surround myself with people who are going to help me tell this story in a way no one has heard it before.”

Mansha Daswani is the editor and associate publisher of World Screen. She can be reached on mdaswani@worldscreen.com.
Previous WaterBear Expands into 30 New Countries
Next Kevin Macdonald Addresses the Covid Experience in 2020: The Story of Us 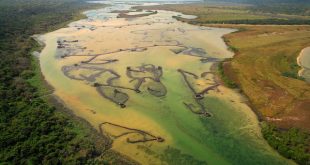 The new factual series Africa from Above, produced by Off the Fence Productions and with ZDF Enterprises as its global distributor, has commenced filming.