Home / Profiles / Kevin Macdonald Addresses the Covid Experience in 2020: The Story of Us

Kevin Macdonald Addresses the Covid Experience in 2020: The Story of Us


Oscar-winning director Kevin Macdonald talks to TV Real about 2020: The Story of Us, in which he addresses the coronavirus in Britain, using testimonies from hospital staff and showing the experiences of ordinary people facing extraordinary situations amid the pandemic.

Macdonald has a body of work that spans the feature films The Mauritanian and The Last King of Scotland to the docs Touching the Void and Life in a Day.

The ITV-commissioned doc 2020: The Story of Us came about in a “coincidental way,” Macdonald tells TV Real Weekly. “Docsville Studios’ Producer Lawrence Elman and executive producer Nick Fraser are old friends of mine. They had been working on getting access to ICU units to make a documentary series—and this was before Covid-19 began. They already had contact with the characters who are in the film. Then Covid struck, and they already had the access; they didn’t have a commission to do the series but wanted to use the opportunity to make a film.”

This is when they got in touch with Macdonald, who says he was immediately struck by the idea. “We decided to try to do this collage kind of film where we see different characters in different parts of the United Kingdom going through sometimes very emotional experiences dealing with Covid. At the beginning, there was an excitement about the challenge ahead, and then you see them become worn down, often depressed, and in the case of Professor Hugh Montgomery, you see the tragedy of him losing his child indirectly because of Covid. It’s a microcosm of the experience that medical professionals around the world had over those initial six to eight months.” Filming started in March 2020 and went through to October, with cameras capturing what was essentially the first wave.

Macdonald and the team had exclusive access to intensive care units across the U.K., with footage captured by NHS staff themselves. “In large part, the techniques used were forced upon us by the rules and regulations around filming in hospitals during that period,” Macdonald says. “The only way to film in an actual ICU at that time in the U.K. was for the doctors and nurses to film themselves. It was really only the doctors who could do that because they had the standing in the hospitals to be able to say they wanted to shoot something and nobody was going to stop them, whereas with the nurses sometimes it was more bureaucratic. A lot of the best material is self-shot using iPhones to record their days and using it as a diary.”

The other shooting posed certain challenges, he adds, and a lot was done through “very unusual circumstances.” Macdonald explains, “I wasn’t able to be there for most of it because they were only allowing one person in, and that was the cameraman, Dan Dewsbury. He really is kind of the co-director of the film in a way because he was on his own for so much of the time, having to make decisions about what to shoot and how to cover it because there were regulations that said we couldn’t have a crew in, only one person, and I’m not that good on the camera. He would shoot stuff; I would review it with the editor, and we would send him back out to get some other stuff.”

The hardest part of the film, he says, was editing. “Trying to find a narrative or a way to use all of these different stories to create the sense of a narrative was a real challenge,” says Macdonald. “David Charap, the editor, turned in an award-winning performance; he did an incredible job of structuring it. We were lucky enough with ITV, which commissioned it, to have a financier that was happy to make a more poetic kind of film, that didn’t have to be literal, that didn’t have to have dates and facts and things all over. It was more about these characters.”

Macdonald hopes that, above all, viewers come away from watching this doc with a respect for those who have been battling this pandemic from the front lines and to clear up any uncertainties around the virus and its effects. “There’s a lot of doubt—doubt that Covid even exists, doubts about the vaccines and a lot of doubt that hospitals around the world are being fooled and that this is not the kind of medical emergency that really required the shutting down of the world. If you watch the documentary, you cannot doubt for a second the stress and incredible difficulty that these medical professionals faced. You can see the toll that it takes on them. It’s about heroism, everyday heroism, of these main characters who we follow. It’s like watching young men going off to war in WWI; they go off fresh-faced and positive and optimistic and thinking it’s all going to be fine, and after six months in the trenches they’ve totally changed. That’s what often makes a very good story, be it a fiction film or a documentary: seeing people change in front of your eyes on the screen—something happens to them in the process of the film that changes who they are. That’s what you see in this documentary. It’s very impactful. I want people to take away from this film: this is real. These people’s lives have been upended because of it; they’ve been trying to help, trying to save, and they’re heroic for that.”

Tags 2020: The Story of Us Kevin Macdonald

Kristin Brzoznowski is the executive editor of World Screen. She can be reached at kbrzoznowski@worldscreen.com.
Previous David Beckham Talks Studio Aspirations at Digital MIPTV
Next BBC Select & Beyond Rights Pact for Doc Titles 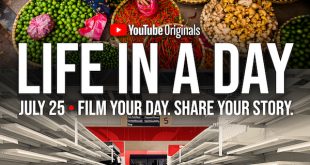