The last year has seen a strong increase in the export of TV programs from France, up 9 percent year-on-year for a total of €354.8 million ($419.3 million), its highest level of the past 25 years.

This is according to the latest figures from le Centre national du cinéma et de l’image animée (CNC) and the TV division of UniFrance (previously TV France International), revealed as part of their annual study of French TV exports.

With 746 programs available on at least one SVOD platform, France is the second most present European country on SVOD platforms internationally, behind the U.K. It is sixth worldwide.

In terms of the number of programs ordered over the last 12 months, France is number three in Europe for fiction and number three for animation and documentaries worldwide.

Dominique Boutonnat, president of the CNC, said, “Despite the health crisis, 2020 was a very good year for exports of fiction, documentaries and animation programs, which shows the capacity of our professionals to respond to international demand. We must capitalize on this success, pursue our quest to dominate the international markets and maintain our advantage. The new UniFrance, which we have just created, will help us take the ambition of our professionals further and around the world.”

“The health crisis that rocked the international TV market in 2020 created issues with obtaining new programs, extended decision-making times and caused uncertainty among broadcasters, but it also created opportunities for sellers,” added Hervé Michel, VP of UniFrance. “An increase in consumption of content during the lockdowns, the greater need for TV programs, the reinforced role of platforms and also our members’ extraordinary capacity to adapt to this challenging context enabled them to extend even further the impact of French TV creation throughout the world.”

Kristin Brzoznowski is the executive editor of World Screen. She can be reached at kbrzoznowski@worldscreen.com.
Previous U.K. TV Production Revenues Take Covid-19 Hit
Next Conviva: Streaming in Europe Holding onto Pandemic Gains 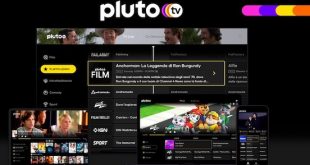 ViacomCBS Networks International, a division of ViacomCBS, has confirmed that Pluto TV will launch in Italy on October 28.