Bavaria Media International’s selections in the TV Movies Screenings Festival include the sci-fi thriller Exit—#1nfin1ty, set in 2047, which Carlos Hertel, the company’s director of international sales, refers to as a “tightly-wound near-future thriller with a long list of virtual and digital ingredients.”

Bavaria Media is selling a dramedy, Lothar—Wake Me Up, When I’m Dead, about a man who upends his life after receiving what turns out to be an incorrect fatal cancer diagnosis. “Everyone can identify with lost opportunity, lost love and a life lost,” Hertel says. “Lothar tragically manages all three. And starts again. Lothar deals with an anti-hero and touches on his stubbornness, love, death and rebirth thanks to the humanity around us. Classic themes and extremely modern execution. Sensitively played and choreographed in contemporary interior design settings. Co-starring acting veteran Corinna Harfouch (The Downfall, Fackju Goethe, Germany 89).”

Hertel also highlights the romance drama Men in Charge, about a young football star seeking to regain control of his life. “A light family drama with a modern approach to the topics of changing social roles, women’s empowerment and men claiming their roles as fathers,” Hertel says. “Romantic elements and an attractive young cast (Tim Oliver Schultz, Zoe Moore) add to the movie’s international appeal and success.” 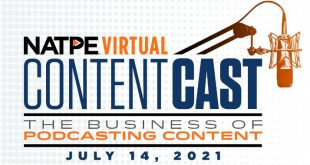 NATPE has unveiled some of the industry executives that will speak at NATPE Virtual: ContentCast–The Business of Podcasting Content, including Propagate Chairman Ben Silverman and SiriusXM Chief Content Officer Scott Greenstein.