CANNES: Modern Family’s co-creator Steven Levitan talked about the hit comedy’s enduring success in a keynote interview at MIPTV today with World Screen’s Anna Carugati. Discussing the show’s production process, Levitan noted that the writers spend two months working on episodes before the cast appears on set. During that time “we come up with about … 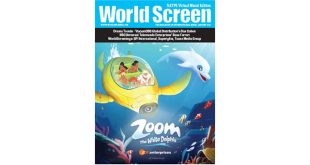 The digital editions of the January issues of World Screen, TV Latina and TV Listings for NATPE Virtual Miami are now available, including a host of interactive features.