The Calculus Creative Content EIS Fund has made an investment in Brouhaha Entertainment, a new production company founded by Gabrielle Tana, Troy Lum and Andrew Mason.

Between them, the company’s founders have produced 27 films and nine television projects to date. Tana’s credits include the Oscar-nominated Philomena, The Invisible Woman and The Dig. Lum founded leading Australian indie Hopscotch Films and was involved in such productions as Saving Mr Banks. Mason has been a producer for over 25 years, with a list of credits that includes Dark City.

The Calculus investment will help Brouhaha—which is based in London and Sydney—fund new film and TV projects. This is Calculus’s sixth investment since the creation of the EIS fund in June 2019 in association with the British Film Institute. Stargrove Pictures identified the opportunity to invest and its CEO, Stephen Fuss, will join the board of Brouhaha.

Tana, co-CEO at Brouhaha, commented, “The producers involved in Brouhaha Entertainment have a track record of creating bold, innovative content with strong connection to A-list talent both above and below the line. We are poised and ready to develop slates to satisfy the market hunger for quality content. The funding from Calculus will enable us to take advantage of this unprecedented content boom.”

John Glencross, CEO at Calculus Capital, added, “The founders have brought together one of the strongest slates we’ve seen since launching the Calculus Creative Content EIS Fund and we are excited to support the business in bringing new content to film and TV audiences.”

Mansha Daswani is the editor and associate publisher of World Screen. She can be reached on mdaswani@worldscreen.com.
Previous Ted Lasso Leads TCA Nominations
Next Tim Erickson to Lead Peanuts Worldwide 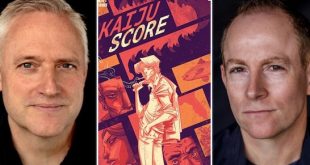 The Kaiju Score Adaptation in the Works

Brian and Mark Gunn are set to write the screenplay for Sony Pictures’ The Kaiju Score, based on the AfterShock Comics’ comic book series.