Pulitzer Prize-winning historian Doris Kearns Goodwin talks about her role as executive producer of HISTORY’s upcoming miniseries Washington and how lessons from the past can help us today.

Kearns Goodwin has spent her career either working for U.S. presidents or studying and writing about them. As a 24-year-old Harvard graduate student, she was chosen as a White House Fellow and worked with President Lyndon B. Johnson. She later helped him write his memoirs and went on to write a book about him. She has also written books on Abraham Lincoln, Theodore Roosevelt, and Franklin and Eleanor Roosevelt.

Hollywood has often sought her scholarship and guidance. Steven Spielberg’s film Lincoln was based in part on her book Team of Rivals: The Political Genius of Abraham Lincoln. Spielberg’s Amblin Partners has also acquired the film and TV rights to Kearns Goodwin’s book The Bully Pulpit: Theodore Roosevelt, William Howard Taft, and the Golden Age of Journalism. She also collaborated on HBO’s film on President Lyndon B. Johnson, All the Way, starring Bryan Cranston.

Most recently, Kearns Goodwin served as executive producer on Washington, a six-hour miniseries that will air from Sunday, February 16, to Tuesday, February 18, on HISTORY. Washington will examine George Washington’s journey from a young military man to the first president of the United States. Dramatic reenactments will be accompanied by interviews with President Bill Clinton, former Secretary of State Colin Powell and numerous historians. Washington is one of several programs and initiatives HISTORY is planning as it celebrates its 25th anniversary this year. A+E Networks holds worldwide distribution rights for the miniseries.

Kearns Goodwin tells TV Real Weekly about her involvement in the project, the value of storytelling and the lessons history holds for us today. 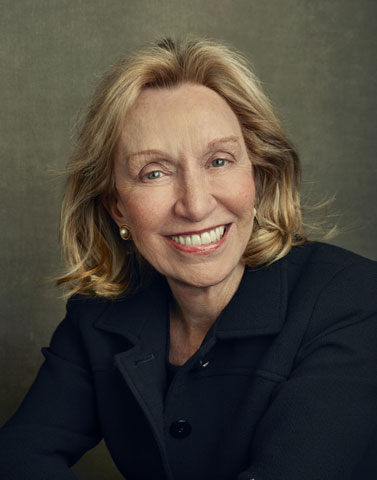 TV REAL: How did you become involved in the miniseries Washington? What were your responsibilities as executive producer?
KEARNS GOODWIN: I have lived with dead presidents for the past 50 years, thinking about them when I go to bed at night, waking up with them in the morning. But the one president I had not had the chance to live with—the one whose presidency set the standard for all the rest—is George Washington. So you can imagine how thrilled I was when HISTORY asked me to be part of this miniseries as an executive producer. I had not served as an executive producer before, so I was not sure what to expect, but these last 18 months have been a great journey as this project has evolved from the concept to the writers’ room. From the early drafts to the interviews with Washington experts, from the shooting of the dramatic scenes to the various cuts, from the interviews with President Clinton and General Powell, to finally hearing Jeff Daniels as the narrator. The great joy for me in this project has been working alongside gifted and seasoned filmmakers and network executives and learning about George Washington through the research, primary documents and the interviews with my esteemed colleagues who have studied Washington for much of their lives.

TV REAL: From reading your book Leadership: In Turbulent Times, I’m reminded of the value of learning from the lives and experiences of exceptional people facing outsized challenges. What do we have to learn from George Washington? Why are those lessons particularly relevant to us today?
KEARNS GOODWIN: I am so glad you asked because we started working on Washington not long after I finished writing Leadership: In Turbulent Times. So we were able to look at President George Washington through that lens of leadership and show his evolution, his transformation from a young man seeking to rise as a military officer into a determined revolutionary who led a rag-tag army against the British Empire. Like “my 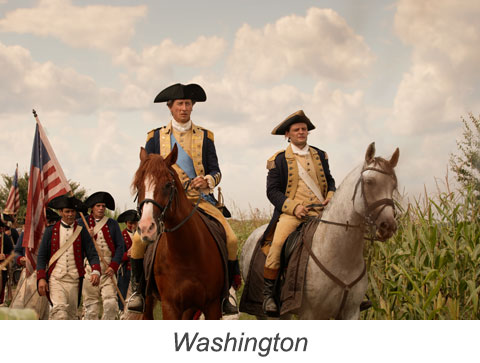 guys”—as I often call Lincoln, the two Roosevelts and LBJ—Washington learns from his mistakes. He grows through adversity. He develops the confidence to surround himself with strongminded people. At moments of challenge, he summons courage and perseverance to mobilize the troops and the public. He becomes a great leader when his ambition for self becomes an ambition for something larger—to lead a fledgling new nation that will become a beacon of hope for the world at large and a lodestar for every president who followed. I think we can all learn so much from him!

TV REAL: Books, TV and film offer different ways of telling stories. What do you enjoy about each, and what are some of the challenges of each? How did you and the rest of the team on Washington ensure the accuracy of the dramatic reenactments?
KEARNS GOODWIN: I have loved telling stories since I was a little girl. Stories connect us in a way that facts and figures cannot. We can easily remember and share what we learn from stories. I think storytelling is part of our collective DNA—dating back to cave drawings through the written word and then with the aid of technology. As a presidential historian, I have tried to bring my subjects to life for an audience—to help them know the presidents I have studied and learn from their lives. And while I have treasured every minute of researching and writing books, it is mostly a solitary endeavor. Working on a project like Washington is a team effort with the benefit of actors and technology! I look forward to telling more stories this way!

As for the accuracy of the story, we were immersed in research throughout the development and production process. We called upon a wide range of experts across fields to recreate Washington’s era. The team at George Washington’s Mount Vernon, for example, was incredibly helpful in informing the story. From using primary source documents to consulting many historians of the 18th century, the whole team worked tirelessly to accurately capture Washington’s world and bring it to life.

TV REAL: Tell us of the importance of narrative, not only in our personal lives but in public life—elected officials and presidents—as well. What advice would you have for presidential candidates this year?
KEARNS GOODWIN: Through stories, we get to know people personally and professionally, and it’s no different for a presidential candidate or a president. By studying the lives of others, we hope that we, the living, can learn from their struggles and triumphs. Winding stories take time to absorb. That is why I was so glad that HISTORY committed three nights to Washington, allowing viewers to see his growth and development, to know about his childhood, feel his anxieties as a young soldier, to see him make mistakes, how he handled them, and how he learned from them. You see the arc of his maturity and how he surrounded himself with strong people, but you also see his temper and frustrations. I think we need to know presidential candidates in the same way. Do they surround themselves with people who can, as we say now, speak truth to power? How do they handle frustrations and anxiety? Are they empathetic? My advice to the candidates would be to tell the stories that let us know who they are as human beings in addition to sharing their ideas and policies.

TV REAL: Many of us are gravely concerned about the direction of our country and the current president. The U.S. has lived through other crises. Are you optimistic that we can see our way through the disrespect and disregard for facts, institutions, the law and even common decency?
KEARNS GOODWIN: Everywhere I go, people ask me: Are these the worst of times? As a historian, I can reassure you: No, these are not the worst of times! We lived through a civil war that tore the country in two and led to more than 600,000 dead. We lived through the Great Depression and through the early days of World War II when the fate of Western civilization hung in the balance. At those times and in those situations, we had leaders who set forth a template of shared purpose, collaboration, compromise and civility. They sought to heal divisions and to summon the citizenry to a sense of common purpose. I am optimistic because, at each time of crisis in our country, healing change percolated from aroused citizens joining together with their leaders toward a moral purpose. We see some of those signs now: a wide and deep burst of citizen activism, young voices coming to the fore, long lines at the midterms that will hopefully carry through to the general election. We can find solace in history—we know that what we as individuals do now, how and if we unite, can make all the difference.

TV REAL: What upcoming projects are you working on—books, TV or film?
KEARNS GOODWIN: I have not yet found my next subject for a book, but I hope to finish the book my husband was writing when he died, which is essentially a love letter to the idea of America. I am mostly focused now on a series of television and film projects through the new company, Pastimes Productions, that I founded with my friend Beth Laski. Washington is our first one to be finished, and we have others in various stages of development. It’s invigorating to be telling stories in this way, watching characters I know come to life as Daniel Day-Lewis did so triumphantly as Abraham Lincoln in Steven Spielberg’s Lincoln, based on my book Team of Rivals. My desire to work in this medium was really inspired by that rewarding experience working with the Lincoln team and then with the team on HBO’s All the Way, in which Bryan Cranston so exceptionally played the role of LBJ. 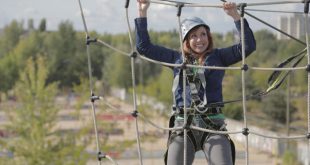 Escapade Media has sold its newest family-friendly TV series, Crash Test World, to Discovery for the U.S. and Canada.