Karen K. Miller has been appointed as president and CEO of Cyber Group Studios USA, while Merritt D. Farren has been named as general counsel and COO.

Miller will join Cyber Group Studios this spring. She was most recently the senior VP of content for NBCUniversal’s Universal Kids. Prior to NBCU, Miller had an eight-year tenure as VP of worldwide programming strategy, acquisitions and co-productions for Disney Channels Worldwide.

Farren, who joined in December, was most recently general counsel at SoundCloud in Germany. He had an eleven-year tenure at Amazon as chief legal officer at Audible.com and associate general counsel for digital media and new technologies at Amazon.com.

“Karen is a talented, innovative, multi-faceted and forward-looking leader, she has an amazing track record in the development and commercialization of successful kids and family global franchises worldwide,” said Pierre Sissmann, chairman and CEO, Cyber Group Studios. “Merritt is a best-in-class top executive with a wealth of business affairs and acquisitions experience in all segments of our business. He will be a great partner to Karen in the development of Cyber Group Studios USA. Both Karen and Merritt bring a remarkable and highly impressive background and maintain an esteemed skillset that has concentrated on creating highly successful children’s media and entertainment properties. We are thrilled to have both of them join our Cyber Group family and look forward to their leadership and support as we head into the next phase of our North American strategic growth efforts.”

Miller said: “I see a tremendous amount of potential to further enhance our slate of original best in class content for kids and families to enjoy and I look forward to partnering with our team in Paris to globalize our development while leveraging Cyber’s unique strength and proven track record in global distribution, financing and high-quality production.”

“I had the privilege of working alongside the two principals of Cyber Group Studios, Pierre Sissmann and Dominque Bourse previously, when we were all at Disney,” said Farren. “I am excited to be working with them again and eager to embark on developing the new roster of great family entertainment.”

Kristin Brzoznowski is the executive editor of World Screen. She can be reached at [email protected]
Previous Rainbow & Toonz Align for Pinocchio and Friends
Next TV Kids Festival Adds Panel on Distribution Trends 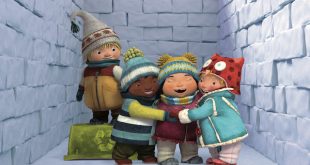 Pink Parrot Media has secured a broadcast deal with Sky for the animated comedy-adventure series Snowsnaps.