Movistar+ Spain is on board for the project, which will chart the life of the Latin Grammy- and Billboard Award-winning musician—including his turbulent relationship with both his mother and father, his path to stardom, his multiple personal relationships, the modernization of a country as personified by him and how he was the catalyst of the Spanish-language pop music revolution.

Overseeing the development and production of the Bosé series will be Shine Iberia’s CEO, Macarena Rey, who is known for her European successes Masterchef and 21 Días. Elefantec Global, the newly formed media and entertainment company from Bastón, along with Legacy Rock Entertainment, are co-producing the series and will handle international sales, marketing and distribution for Mexico and Latin America.

Bosé commented: “I was to live an exceptional life, full of privileges as well as miseries, born in the Olympus and wagered in hell, but nevertheless thrilling, unique and unrepeatable. Time has come to tell it all.”

“This project represents an amazing challenge for Shine Iberia. Miguel Bosé is an icon for Spanish speaking audiences worldwide,” said Rey. “To talk about Bosé is to walk through the history of Spanish music over the last decades. He is a fascinating character with a unique and intense life story. We are certain that this TV series will be a big event for all Spanish speaking music lovers.”

“We see the growing demand of premium content for the Spanish-speaking viewers around the world and across many different platforms, and this series has everything: drama, love, struggle, growth, forgiveness that will appeal to viewers around the world,” said Bastón. “We are very excited to work alongside our associates at Legacy Rock Entertainment and have been invited by Miguel Bosé and Macarena Rey to participate in this project for Movistar and we look forward to bringing this as well as other high-quality productions to the world.”

Kristin Brzoznowski is the executive editor of World Screen. She can be reached at [email protected]
Previous The Last Days of Marilyn Monroe Drama Series in the Works
Next Netflix Sets Season Two Premiere Date for Korean Original Kingdom 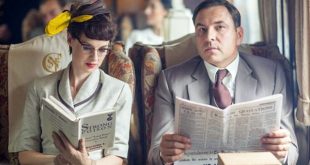 Ovation has acquired the non-exclusive U.S. broadcast rights for Agatha Christie’s Partners in Crime from the U.K. and Australia’s A Place to Call Home.