When wreckage from a destroyed alien spacecraft scatters across the Western Hemisphere, it soon becomes apparent the pieces are messing with the laws of physics, changing lives in ways we can’t comprehend. Two agents from different continents, and different mindsets, are tasked to work together to recover the debris, the mysteries of which humankind is not quite ready for.

The series stars Jonathan Tucker (Kingdom) and Riann Steele (The Magicians). Debris will premiere on NBC on March 1 at 10 p.m. It is produced by Frequency Films and Legendary Television in association with Universal Television, a division of Universal Studio Group.

Kristin Brzoznowski is the executive editor of World Screen. She can be reached at kbrzoznowski@worldscreen.com.
Previous Kin Launching on Viaplay
Next New J.J. Abrams Series Lands with HBO Max 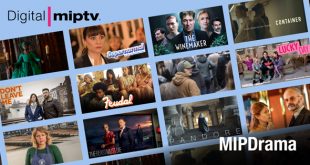 Reed MIDEM has unveiled the lineup for this year’s MIPDrama, the annual premium drama showcase offering international buyers an exclusive first look at a curated selection of series in production.