Onza’s founding partners, José María Irisarri, Gonzalo Sagardía and Nicolás Bergareche, will remain shareholders and continue to manage the company. Bulgari, Raúl Ballestero and Stefano Torrisi will join as new members of the board of directors.

The new partners plan to jointly produce and distribute content for Spain, Italy and Latin America.

Onza was originally founded in 2014 with the aim of developing and producing fiction series, entertainment shows and documentaries for the Spanish-speaking world. It has been active in the United States since 2021 through its subsidiary Onza Américas, which is currently producing a drama series for ViX+ and a series in podcast form for Spotify in LatAm. Titles it has produced include The Department of Time, Little Coincidences, Parot and Hernán.

Garbo Produzioni was founded in 2017 by Bulgari and has been committed to the production of a vast catalog of high-quality television series, docuseries and other entertainment products intended for Italian and international audiences. Its titles include L’Ispettore Coliandro, La Porta Rossa and Il silenzio dell’acqua. The company recently opened a Spanish brand, Garbo Stories, to promote international projects.

“We are very excited about the entry of the audiovisual group led by Maite Bulgari as a shareholder of Onza,” said José María Irisarri, president of Onza. “It means opening a new growth phase in which we share the strategic vision and ambition to produce the best content in Spanish-speaking markets and in related territories such as Italy, where Maite has a great team of executives led by Stefano Torrisi.”

Bulgari, Onza’s new VP, added, “I am very happy to have found a strategic partner for us in the Spanish and Latin American markets who shares my passion for stories and enthusiasm for finding original content in the audiovisual world. I am convinced that together we will be able to carry out an industrial project that will consolidate our skills and produce quality content bringing our stories to other territories.”

Jamie Stalcup is the associate editor of World Screen. She can be reached at jstalcup@worldscreen.com.
Previous Tubi & Incendo Expand Film Pact
Next The English Notches Up Raft of Presales 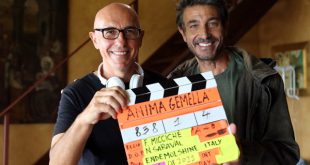