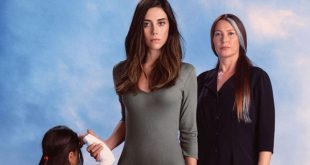 Eccho Rights has sealed a deal with the Swedish public broadcaster SVT to air the Medyapim drama series Mother.