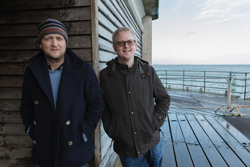 Brothers, business partners, co-creators and producers of some of the best and most innovative British television in the last decade, Jack and Harry Williams founded Two Brothers Pictures in 2014. The indie label, acquired by all3media in 2017, produced Phoebe Waller-Bridge’s award-winning Fleabag and the critically acclaimed The Missing, which the brothers also wrote. Many of their shows offer new twists—a story told in reverse order, as in Rellik, or from two points of view, as in Liar. They revisited The Missing’s difficult but brilliant investigator in Baptiste and have set their upcoming mystery The Tourist in the Australian outback. Despite the often dark subject matter of their TV shows, Jack and Harry are known for their humor—and for finishing each other’s sentences.

WS: How did The Tourist come about? Is this show different from others you have written, and if so, how?
HARRY: The Tourist came about from a desire to do something new and something different. It’s a lot of different styles and types of shows mixed up in an oversized blender. It’s got the intensity and drama of one of our grittier thrillers, but there’s a dark kind of comedic tone in there too. We haven’t gone that way since our darker days of (very poorly received) comedies, so it’s oddly exciting to see how it comes out of said blender. It’ll be either a refined and delicate purée or just some lumpy sludgy stuff with something that looks like sweet corn in it.

WS: With so much scripted drama in development, what does a story need to make commissioners feel they want the project?
JACK: Every story has been told in some form or another, so to get one away with so much out there, it should feel fresh. Like a version of that story you’ve not seen before. That can be the world it’s set in, the way it’s told, the characters who take us through it. Trying to second-guess what people might want never really works—copycat shows don’t excite people. The shows that excite us are the ones that feel so different and unique you wonder if anyone will even want them.
HARRY: Or just put people who have special powers in it.

WS: Many of your shows are co-productions. Would you give some examples of how you work with the different partners involved in a co-produced project? Do you receive notes from all partners?
HARRY: Yes, most of them have been [co-productions]. We get notes from all our co-production partners throughout the process, and generally, it’s worked well. They’ll feed in notes at the same time as our U.K. broadcaster, and we’ll look at them all on a case-by-case basis. All notes are a way of looking at the script again and seeing if there are any holes or ways to improve it. It’s all about the specific project and the people working on it. Usually, if they’ve agreed to make it, they loved what we did about the show, so we’re all starting on the same page.

WS: In a co-produced show, how does a final script emerge ready to start production?
JACK: Final scripts emerge slowly and awkwardly and are constantly changing because of locations or schedules. But going into prep, we always have all the scripts written and the story clearly laid out. Then it’s a matter of trying not to make it worse.

WS: The Tourist was announced before the pandemic. How have you prepared for production so you can comply with COVID-19 safety protocols? What types of adjustments to scenes have you needed to make?
HARRY: There are protocols we’re working to, which our marvelous head of production has been on top of. Largely we’ve not had to make too many changes, but, of course, some have arisen—locations, extras, all these things are affected, but with plenty of time leading up to filming, there’s enough latitude to work out solutions that don’t compromise the script.

WS: What other shows does Two Brothers have ready to start or resume production when it is safe to do so? In what countries are these shows scheduled to shoot?
JACK: We have a couple we’re filming. Baptiste had to shut down earlier this year, as people know, but we’re starting again soon, which is hugely exciting. And there is a new show, which should be shooting imminently.

WS: Do you have a process when you write? How do you come up with ideas, and how do you share the writing?
JACK: It can take months for an idea to become a show. Or one of us just blurts out a title and premise and there it is. So there are no rules, other than we need to be excited to write it. Usually, we’ll have the idea, sit on it for a bit, discuss it, and then if we still want to write it, it’s probably worth writing. In terms of sharing the writing, we plot the whole thing together, then divide it in half and write half, then swap it. We’re not precious, really, but it’s 95 percent figuring out the story/characters, etc. And then only four percent the actual fun bit, which is writing. One percent is deciding what to have for lunch.

WS: Would you give us examples of how you work with other writers?
HARRY: It’s completely different for each writer. Some will want more feedback or input; some we need to get out of their way and let them do their thing; some need to be tortured slowly and painfully until they squeal for mercy. As writers ourselves, we’re happy to sit and help break stories or work through characters, but we think the most important thing we do is advocate for the writers we work with. Production can so often be a process by which well-meaning groups of people can come to endless well-meaning compromises and the show itself has the edges sanded off and somehow, the thing you loved in a script gets lost. So we’re very aware that everything comes from the script, and it’s our job to help protect that from start to finish.

WS: How have you seen British drama evolve during the last decade?
JACK: It goes through phases; people loved relentlessly grim noir-ish dramas for a while. These days it seems they want to be entertained a bit more. There’s always a market for all kinds of shows, but it does feel like we’re headed somewhere a bit more escapist or at least slightly less depressing. Also, with so many outlets, there’s been an explosion in the range of genres and types of drama on offer, as things that might have been perceived as niche a few years ago are now mainstream.

WS: Even before the pandemic, some people were saying there was too much drama. What is your view? What role might COVID-19 play in changing the volume of drama produced and consumed?
HARRY: To us, it doesn’t feel like too much, but when you’re in the middle of the bread factory every day, you don’t really stop to wonder about whether there’s too much bread. People certainly needed it during lockdown. It was a way out. And the great thing about there being so much choice is that there’s a much broader range of options for every demographic and taste. People can find the shows that speak to them.
JACK: COVID-19 will, in the short term, inevitably reduce the amount of drama produced. Things take longer to shoot, which means they cost more, which means there’s less money to go around. That may (hopefully) just be short-term, though. Now the lockdown is starting to have a visible effect on our screens—there’s not enough new content, and repeats are starting to appear on the schedules, and it feels like people continue to want to be entertained. At least we hope they will, or we’re out of a job.
HARRY: Unless we put people with special powers in it. Then we’re golden.

Anna Carugati is the group editorial director of World Screen.
Previous Charging Ahead
Next A Note from the Editor

Showtime Renews Back to Life 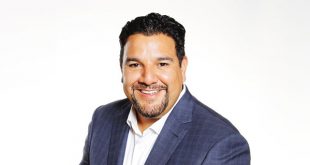