Science Channel has positioned itself as a destination for the thought provocateur, a viewer who isn't afraid of delving into the unknown. This audience has been turning out in droves, leading to quarter after quarter (after quarter!) of consecutive ratings gains. Last year, Science Channel debuted its first-ever scripted feature, The Challenger Disaster. Headlined by the Academy Award-winning actor William Hurt, the program drew in more than 1.9 million viewers with its simulcast on Science and Discovery Channel. For Science, it was the most-watched program of 2013. Debbie Myers, the executive VP and general manager of Science Channel, tells us about what's on the planner for 2014, which includes some scripted fare as well. 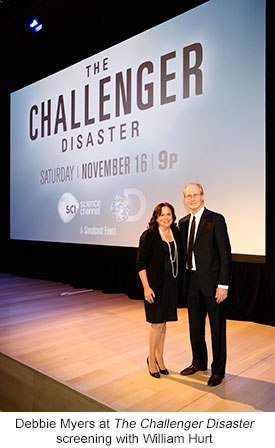 TV REAL: What has been the strategy for original programming?
MYERS: We've always been all original. Some are co-productions that we do, but the network is 24/7 original content. We've been ordering more and more of it over the years, because it has been wonderfully successful.

Among the series that we keep renewing that have been power-hitters for us is first and foremost Morgan Freeman's Through the Wormhole. We are about to go into season five. What started as an experiment about merging pop culture and deep science worked, and every year the ratings just continue to grow. That was our first big series when I took over at Science that we launched, and it's probably our most successful.

We launched a very successful series with James Woods called Futurescape. It's a little twist of sci-fi, so there's a bit of scripted layered on top of deep science. It looks at the seeds of technology that are being planted today, and if you fast-forward ten years from now, how it changes our world. It's very fun and playful, and has been doing well.

Then, we have about 17 successful series or returnable events, like Punpkin Chunkin and How It's Made. Outrageous Acts of Science takes the best user-generated science from YouTube and from the Internet and brings in a great young team of scientists from around the world to comment on it. That's been a success and is coming back in the first quarter of 2014, along with The Unexplained Files, which was new last year. It tells stories that are out there that science just can't explain. It is that journey of scientific discovery and investigation that makes it delicious.

So, there's a good, healthy foundation of returning series, and then some brand-new swings that are coming. NASA's Unexplained Files started as a one-off special that rated through the roof; every time we repeat it, it still rates through the roof. We're launching that in March as a full-blown series. There is no shortage of ideas about how to make science accessible for an audience.

TV REAL: Tell us about the channel's foray into scripted features with The Challenger Disaster.
MYERS: The Challenger Disaster was a big experiment that paid off beautifully. It was a partnership with BBC's science division. Their big brother is BBC and our big brother is Discovery Channel, and we sat down one day and said, Let's put our heads together and see if the two younger siblings in the family can do a really beautiful science drama. I said that the caveat is that science has to be woven in and that we have to come up with such a beautiful script that we'll get A-list talent. That's been my experience on Science Channel—when you have A-list powerhouses of science or of pop culture, it brings in more people.

We hired a great writer, in Kate Gartside. The script was so amazing that it brought in William Hurt right away, and James Hawes as director, who, among many of his accomplishments, is the director of Doctor Who. The rest of the cast came into place. We had a ball making this; it was a complete labor of love on both sides. It became a press darling. It had great reviews and great ratings (we shared it across Discovery and Science Channel).

Now, we have very stringent criteria of what types of drama we would do. Right now we have four projects in development, and our goal is to have one or two of these a year as a tent pole that launches a brand-new series. We launched Futurescape out of Challenger.

TV REAL: Science Channel has seen several consecutive quarters of ratings gains. What's driving this growth?
MYERS: Passion. I think science right now is undergoing a renaissance in this country. Look at the success of The Big Bang Theory, the success of Gravity at the box office—people are hungry for smart entertainment, and that's our mission: to entertain smarter. By the way, not everything works. We've had our share of failures too. With everything we select, we know that audience inside out, and we are looking for ways to entertain them first and foremost but also find a smarter way to bring it all alive.

TV REAL: What is the channel's global footprint currently?
MYERS: We are approaching 80 million homes in the U.S. Around the world, we're in another 100 million homes. The cool part about Science Channel is that we've got individual networks all around the world, but then our content can also feed Discovery Channels around the world. If there's a region, for example Asia, that wants to beef up the science content on their Discovery Channels there, you'll see our channels pop up as well.

There is a creative team led by Julian Bellamy [creative director and head of production and development for Discovery Networks International] and Luis Silberwasser [executive VP and chief content officer for Discovery Networks International] that does originals for regions. They are looking to commission shows where the first client is the international networks, then I will buy in for a second window on some. It's up to the individual commissioners in each region about originals. Since science is truly international, when we cast we try to make it an international group of scientists. Yes, we program with mostly an eye toward the U.S., but when we can flavor it with scientists from around the world, we look for the best and the brightest and for people who are excellent science communicators.

The leading source of information for the international media business.
Previous Another Season of hitRECord on TV for Pivot
Next eOne Commits to First-Look Deal with Three River Studios