Paramount UK has appointed Federico Ruiz as commissioning editor for factual and non-scripted.

In his new role, Ruiz will commission factual titles across the Channel 5 portfolio as well as the streaming service Paramount+, which launches in the U.K. and Ireland on June 22. Ruiz joins Paramount UK from Firecracker Films, where he served as head of factual entertainment.

Starting on May 16, Ruiz will report to Ben Frow, chief content officer in the U.K. at Paramount.

During the last nine years at Firecracker, Ruiz oversaw the company’s factual-entertainment output, with senior executive involvement across company strategy, development, pitching and production. He executive produced and delivered many series for Channel 5 and 5STAR, including The Town the Gypsies Took Over, Dale Farm: The Great Gypsy Eviction and Bad Teen to Ballroom Queen.

Other executive producer credits over the course of his career include many seasons of My Big Fat American Gypsy Wedding (TLC); Dr. Christian Will See You Now (UKTV); Emily Atack: Adulting (UKTV); Open House: The Great Sex Experiment (Channel 4); and the forthcoming Vicky Pattinson: My Dad, Alcohol and Me (Channel 4).

Ruiz has also been showrunner on The Only Way Is Essex (ITV2) and director on Coach Trip seasons five and six (Channel 4) and I’m a Celebrity…Get Me Out of Here Now! (ITV2).

Ruiz said: “Having made so many series for Ben and his amazing team at Channel 5 over the years, this feels like a natural fit. I’m super excited to join a team that is firing on all cylinders, and I can’t wait to get stuck in.”

Frow added: “With Channel 5 continuing to show growth and Paramount+ launching next month, Fed brings a wealth of talent and factual experience and will be a great asset to our expanding team.”

Chelsea Regan is the managing editor of World Screen. She can be reached at cregan@worldscreen.com.
Previous Abacus Media Rights Picks Up Wonderland for Distribution
Next Sky Studios Taps Head of Documentary Partnerships 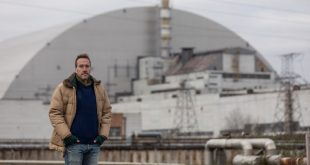 Channel 5 has greenlit the docuseries The Chernobyl Disaster, as well as Michael Palin: Into Iraq, which offers a window into the country nearly 20 years after the start of the Iraq War.