Character-driven comedy elevates kids’ content across all genres for all markets and all ages.

Television titles aimed at kids—whether they are about superheroes or heroes from the pages of history—need comedy. And kids’ comedy—whether it be slapstick or situational, if it wants to travel across continents or your living room—needs character at its heart to drive it home.

Comedy is not only the best-selling and best-performing genre in the kids’ content arena, according to leading industry execs, it’s also the key ingredient across all other genres of programming aimed at kids, peppering everything from action and adventure series to the programs that seek to educate its young audience. The universality of wanting to be entertained and wanting to laugh is as true—if not more true—for kids as it is for their elders. Comedy’s ability to engage and connect is all the more amplified by carefully constructed characters to support it.

“Comedy is the essential component for most genres,” says Dominic Gardiner, CEO of Jetpack Distribution. “Even if a series isn’t supposed to be funny, it’s good to have comedy in it. Preschool, education, adventure, everything has comedy in it. If you’re trying to get kids to pay attention, then comedy is the best way to hold their eyes. Comedy is like the currency of kids; the way kids behave with each other. They’re always laughing, they’re always making jokes or doing silly things, so that’s what the content needs to do in order to engage with kids.”

Vince Commisso, president and CEO of 9 Story Media Group, concurs with Gardiner that comedy is essential. “I don’t think you can make any kind of kids’ content these days without there being a comedic element to it,” he says. “Kids always want to be entertained with a smile, with a giggle. You can engage them through some other ethos—creativity, friendship, family, empathy—but if there’s not a comedic element to it, you won’t succeed.”

As a frequent supplier and partner of PBS Kids, 9 Story has ample experience infusing comedy into content that aims to have kids learn while they’re laughing. Those shows “always have an educational component, but they [also] always have entertainment at the forefront,” says Commisso. “I think you have to actually lead with the entertainment and with the comedy and then deliver the education in that construct because that’s what sticks.”

At Guru Studio, “we’re always focused on character-driven stories,” says Jonathan Abraham, VP of sales and business development. “Comedy has to come from characters being put in situations where their personalities can come through.”

Tom van Waveren, CEO and creative director at CAKE—which recently secured a global deal for a series based on the Lucas the Spider YouTube shorts—also sees characters and the comedy that spools out and around them as the true pulse of shows that want to help kids learn. “You put the characters at the center of the storytelling and wrap the educational around it, rather than making a show about the education and trying to wrap a character story around it,” he advises.

It’s a given that comedy can be a portal to learning, providing kids an education on all matter of topics and subjects without them feeling like they’re back in the classroom. Curriculum-based comedy, so to speak, is part of a larger pattern in demand that sees broadcasters and SVODs being more interested in genre shows with comedy than shows with comedy as the sum total of their parts.

“It has moved to action-comedy, adventure-comedy, while before it was just pure comedy; it’s segmenting into genres,” says Pierre Sissmann, chairman and CEO of Cyber Group Studios, who believes that comedy can help kids absorb more important topics, including family values and dynamics.

Finding the right sort of comedy to inject into a series, however, can be difficult. According to those making and distributing these series, creating quality comedy comes with unique challenges that many companies struggle to meet—a reason for the ongoing demand for such shows.

“There’s always a lack of comedy because it’s hard to make good comedy,” as van Waveren succinctly puts it. “It’s a hard genre to get right. There’s not a diminished appetite for it; I think it’s as good a time as ever to do a good comedy.”

Josh Selig, CEO of Little Airplane Productions, which is developing the new comedy Doctor Space with Studio 100 Media and Fantawild Animation, was similarly blunt. “There’s always a big demand for good comedies for one simple reason: the supply is always so limited,” he says. “Good comedy is very hard to make, especially in animation.” Having a funny showrunner on board overseeing every step of the process is Selig’s advice to beat the odds of a comedy bust. But otherwise? “Companies should stay away from comedies unless they are great at making comedies.”

Slapstick has been around since the silent era. And modern non-dialogue programs aimed at preschoolers continue that tradition. The appeal of creative but ultimately innocuous injury endures. Though depending on who you ask, slapstick’s ability to resonate is up for debate and contingent on all kinds of factors—from age to country to the vehicle of that comedy. Mr. Bean, for instance, referenced by two execs surveyed for this feature, resonates because of the titular character. “Mr. Bean is a great example of how physical humor can work really well,” says CAKE’s van Waveren. “Because ultimately it informs the character.”

Cyber Group’s Sissmann has observed a rise in slapstick’s popularity in recent years, a trend that has benefited the company’s hit show Taffy. In the vein of Tom and Jerry, the series centers on a raccoon who invades a dog’s rich domestic life by disguising itself as a cat. “Slapstick humor has always worked,” says Sissmann. “There have been ups and downs, but I think that today it works much better than it did ten to 15 years ago. Maybe because times are more serious and there are more issues around the world and people need to laugh more.”

Of course, in order to achieve good slapstick, there’s that pesky need for a character worth investing in to support it, to make people care. “You can’t just have an anvil fall from the sky; you have to have it set up by character,” says Commisso of 9 Story. The characters become even more vital to the success of a series and its comedy beats when the target audience is older. The comedy then “comes from interactions between the characters,” says Commisso, and the characters “do things that are unexpected or say things that are unexpected.” When the audience gets a little bit older still, “the comedy gets to be kind of wise-cracky.”

When you’re looking at comedy that can do as well in Asia as in Europe as in North America and so on, slapstick would seem to have fewer barriers to entry. And it can and does travel well. “The pie in the face, regardless of what part of the planet you’re from, that’s a funny gag,” says Jetpack’s Gardiner. “You don’t need to explain that or translate that.”

Guru’s Abraham echoes the point. “Slapstick comedy is obviously going to travel internationally the easiest,” he says. “The biggest challenge when it comes to comedy traveling around the world is having to dub the show into local languages. Sometimes the context of the jokes is lost, or the way the words are positioned will directly impact the delivery and the comedy is entirely missed.”

While Jérôme Alby, managing director at Mediatoon Distribution, joins the consensus in pointing to slapstick’s ease of entry to markets the world over, he also finds that programs can travel on the coattails of known characters—like Garfield, for instance. “Garfield is a global character; for people in America, it’s American, for the Chinese, it’s almost Chinese,” he says. “Typically, the best shows are the ones that have global reach, and that people in every country think that it’s local, that it’s theirs.”

Odd couple comedy duos also have broad appeal, according to Alby. “It’s a global and universal thing. You can be somewhere in a small tribe of Amazonia as well as a village in Germany and everyone laughs at it.” 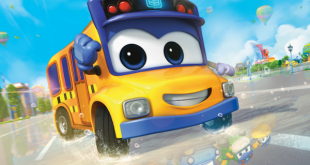 Gogo Bus, an animated kids' series from Winsing in China, has made its debut on Astro in Malaysia.