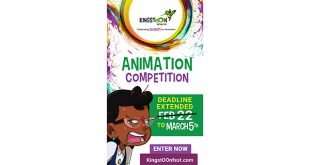 KingstOOn Animation Festival has decided to extend its competition deadline to Friday, March 5, at 11:59 p.m.