Los Angeles-based Upgrade Productions is teaming with Japan’s Shochiku on the eight-part series A True Novel, adapted from the award-winning book by Minae Mizumura.

Shochiku, the creator of the feature film series Tora-san, will produce the show, the script for which is being penned by Riko Sakaguchi (The Tale of the Princess Kaguya, Mary and the Witches Flower, After the Rain). Upgrade will executive produce.

Mizumura’s novel, which won the Yomiuri Prize for Literature in 2003, is inspired by Emily Bronte’s Wuthering Heights. telling a love story spread over three generations in the decades after World War II in Japan and the U.S.

“The extraordinary team at Shochiku, one of Japan’s most innovative and successful studios, is the perfect partner on this show,” said Matt Brodlie and Jonathan Kier, co-presidents of Upgrade Productions. “A True Novel is a beautiful story with universal themes, and to be collaborating with the incredibly talented Riko Sakaguchi is a dream come true. It’s an epic story that is appealing to global audiences.”

“We are excited to be adapting this powerful story, based on a prestigious and popular Japanese novel; collaborating with Upgrade will help us bring this series to the world,” added Meri Koyama, head of sales at Shochiku, and producer Shuhei Akita. “We are confident in Riko Sakaguchi’s ability to bring the beauty of this novel to a series that will be equally as dynamic and engaging.”

Brodlie and Kier launched Upgrade in 2021 to source, develop and produce premium local-language film and series for global audiences in partnership with Germany’s Constantin Film.

Mansha Daswani is the editor and associate publisher of World Screen. She can be reached on mdaswani@worldscreen.com.
Previous SYFY Unveils 30th Anniversary Content Lineup
Next APC Notches Up Deals for Pandore 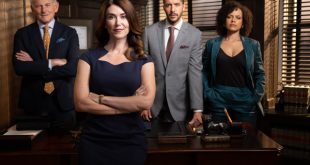 Global in Canada has greenlit a third season of the hit legal drama Family Law ahead of the season two premiere.