Resident Alien, an oddball drama series based on the Dark Horse comic of the same name, is set to bow on CTV Sci-Fi Channel.

The ten-episode series follows a crash-landed alien named Harry (Alan Tudyk, Rogue One), who takes on the identity of a small-town Colorado doctor. Arriving on Earth with a secret mission to kill all humans, he slowly begins to wrestle with the moral dilemma of his task. Resident Alien is slated to premiere on CTV Sci-Fi Channel on January 27. New episodes will be available to stream on CTV.ca and the CTV app.

Chelsea Regan is the managing editor of World Screen. She can be reached at [email protected]
Previous New Seasons of Nancy Drew & Charmed for W Network
Next TNT to Host Network TV Premiere of Captain Marvel 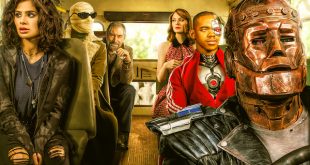 Apple TV+ has given a straight-to-series order to the new drama Lessons in Chemistry, starring and executive produced by Academy Award winner Brie Larson.