Home / Profiles / Behind the Scenes of Help

Behind the Scenes of Help


When the Covid-19 pandemic swept the world in 2020, no one was left untouched by its effects. The consequences were especially stark for those in the care sector, with the lack of personal protective equipment for staff, overloaded homes and underfunding. These struggles experienced by care workers are portrayed in the new heart-wrenching drama Help, starring Jodie Comer and Stephen Graham and directed by BAFTA Award winner Marc Munden.

“When screenwriter Jack Thorne told me he was writing something about the care sector—he described it as a love letter to the care sector—I knew I wanted to be involved,” says Munden, whose own mother has been in a care home for Alzheimer’s for ten years.

Munden saw the opportunity to create something that was immediate and relevant, as everyone was still in the grips of Covid, and “set in a social-realist world like the old Play for Today TV strand but also addressing the political betrayal that had given rise to the appalling number of casualties in care homes.”

“I felt it could be an emotive piece that would spark debate,” Munden continues. “People had recent memories of the brief period in history we were describing, and we wanted to get a raw, rough journalistic piece out while memories were still fresh.”

Once the script for Help was written, Thorne, Munden and the actors continued to research before and during filming. They talked to people in the care and medical sectors to ensure the film portrayed authentic experiences and held nothing back. 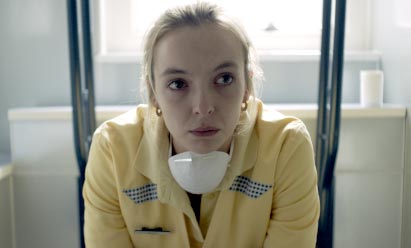 “There was a large number of care-sector workers who just poured out their stories to us—lots of tears; they were still going through lockdown,” says Munden.

Though the film is set during the first lockdown of 2020, they talked to these workers during the second long lockdown in January 2021. “They were still in the trenches,” Munden points out. “They were overwhelmed. And it was very raw for them. They wanted to tell us their experience, but a lot of them were still in a state of shock.” They also felt guilt over the patients they had lost and “anger about what they felt was a betrayal of the care sector.”

These intense, raw emotions are particularly poignant during a heartbreaking scene that was filmed in one 26-minute take, during which Comer’s character, Sarah, struggles to find help to save her early-onset Alzheimer’s patient Kenny, played by Graham. “I wanted to immerse the audience in that marathon task the way that she was immersed, make people endure and experience what those care workers did when they were living with this out-of-control situation and see that poor man left to die in pain,” Munden says. “Wring them out in the way that Sarah was wrung out by the end.”

Munden describes this section of the film as a home-invasion horror. “You have a woman alone in a home with this silent, invisible invader, and she just can’t communicate with the outside world,” he says. “What was important was for the dread that Sarah experiences in the film to be grounded in fact rather than manufactured. The care workers in those homes experienced true-life horror in their work.”

Though Munden is passionate about and confident in the concept of the film, he does admit he had doubts over whether it was too soon to make something on the subject. However, he notes that “now, almost a year later, we are still in that same situation. The pandemic is not over and won’t be over soon. In some ways, it is worse for people, particularly the vulnerable who were adversely affected by opening everything back up in the summer. So, when is a good time to make something that spurs debate about something that will go raging? Help was made in the spirit of a call-to-arms in the middle of a war.”

The intense, raw emotions come through at the end of the film, as well when Sarah breaks the fourth wall and directly calls out the government. Her tirade is “a passionate piece of angry polemic,” Munden says. “It’s not just aimed at the policeman sitting in the front of the car; it’s aimed at all of us beyond the fictional world of the film. What responsibility are we going to take for our vulnerable and disabled and disadvantaged? Have we lost our humanity and compassion?”

The drama, distributed by All3Media International, has already aired in the U.K. to critical acclaim and will be available in the U.S. and Canada on Acorn TV at the end of January. Ultimately, Munden hopes Help “makes people angry. Things have got to change for the sector.”

Jamie Stalcup is the associate editor of World Screen. She can be reached at jstalcup@worldscreen.com.
Previous Inter Medya Adds Aziz to Catalog
Next ABC Orders More Grey’s Anatomy 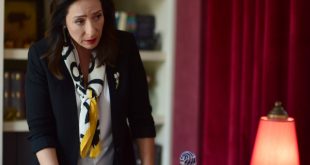