Screenwriter David Farr and director Alice Troughton had read John Wyndham’s critically acclaimed 1957 novel The Midwich Cuckoos, about aliens that impregnate all the women of child-bearing age in a small English town, as children. When the opportunity arose to bring the dystopian classic to TV as a scripted series for the first time, they both jumped at the chance.

“It blew me away a bit,” says Farr of the experience of reading the novel when he was 12 or 13. “I was in a small town in the south of England, and it had similarities to the insular community the book was set in. There’s this alienating feeling of dread. You couldn’t trust the world you lived in. It’s perfect for being a teenager! It stayed with me for years. I met a producer 10, 15 years ago, who asked, Do you like John Wyndham? I said, Yes, particularly The Midwich Cuckoos. And he said, Well, we’re trying to get the rights. I don’t know if we can. It’s very complicated. They’re stuck in Hollywood because of the John Carpenter movie. That’s why nothing’s ever happened with this extraordinary story. And then I get a phone call about four years ago saying, We’ve got them.”

Farr, whose extensive list of credits includes The Night Manager and Hanna, decided to set his adaptation—produced by Route 24 and Snowed-In Productions, in association with Sky Studios—in the modern day rather than late ’50s England. “I wanted to bring it to a new audience and new viewers. It’s a modern setting, not as rural as the book. I wanted to set it in more of a commuter town. That brought in all sorts of different things. So, for example, it felt very important that you shouldn’t pretend that you could hide these children in the way they do in the original book. In the original book, the children are all identical. They all have the same blond hair; it’s obvious that they’re not human in a normal sense, but because they’re in a tiny community in 1957, no one notices them. Whereas in our world, we are surveilled, we are monitored. John Wyndham was interested in totalitarian ideas, Stalinism and Nazism. That’s not our world. Our world is a world of individualism, consumerism, the illusion that we have choice, the illusion that we can make a safe world for ourselves. So I didn’t want the children to be all identical. I wanted it to be subtler in that regard.”

Farr also flipped the gender of the book’s protagonist, Gordon Zellaby, in the adaptation, which premieres on Sky Max this week. “The book is very male,” Farr says. “I wanted to make the television program much more about the women, the mothers. It’s a female story. So I changed the lead character to a child psychologist, a woman called Dr. Zellaby, whom Keeley Hawes plays. That shifted the entire drama. It became about anxiety among children and about mothers and children.”

Both Farr and Troughton knew Hawes would be perfect for the role. “We both wanted someone who could carry a little bit of glamor,” Farr says. “She’s not from the town. She has a certain stature that perhaps not everyone in the town has. She’s not as normal as some of them. She’s a touch of an outsider and she’s a listener. As I think of her, she’s the priest of the village. She also is a complete emotional mess under the surface. But you mustn’t see that too soon. She knows how to time a performance. She doesn’t give everything away too quickly. She can be very calm and relaxed. And then she suddenly surprises you with emotion that you didn’t see coming.”

Troughton (Tin Star, Baghdad Central, A Discovery of Witches) quickly signed up to serve as the show’s lead director, attracted to “the cleverness of it, the boldness of it, the time to spend with the characters who become parents to these children. I was just so hooked. It’s not the 1950s power dynamics between genders. There’s the theme of control over female bodies. Controlling female bodies is the essence of an uncivilized society. Until we have volition and power over our bodies again, we won’t have equality or gender parity. In a genre format, we’re allowed to explore that with imagination and creativity.”

The novel has twice been made into feature films: in the 1960s, by MGM, and again in 1995 by Carpenter. Farr had not seen Carpenter’s 1995 take previously, despite being a huge fan of the director. “This is probably his worst film,” Farr says of Village of the Damned, which moves the action from a sleepy 1950s English town to contemporary California. “It just doesn’t quite work. Curiously, I learned quite a lot from it. The old film [MGM’s 1960s release] was very faithful to the Cold War aesthetic and worked beautifully, although I found the second half less satisfying. I think the children run out of steam because they’re so identical. You just know exactly what they’re going to do. For me, that was a great lesson. If you’re going to do a long television series, you don’t have the stereotypical children who are always going to do exactly the same thing. You have to create relationships that change and evolve. That involves conflict. You have to have conflict in the end. And how do you have conflict when you’ve got a hive mind? That’s one of the most interesting things about this story. John Carpenter went very fast, and therefore, we never got to care about anyone.”

Farr and Troughton were excited about the opportunity to tell a complete story in a limited series, without having to worry about turning it into a returning production. “For me, the pleasure of adapting a book is there is an acknowledgment that you are updating it, revolutionizing it, making it relevant for now, but you’re telling that story,” Farr says. “And I’ve always preferred to have a proper ending and resolution to my shows, even on something like Hanna, where there was an understanding that it would go on. I only dared once to actively have an open ending, if you like. I don’t feel that comfortable with it. It feels a bit whorish somehow! But this one has a very strong resolution. Having said that, it is the culture now that if something’s successful, people will always come knocking and asking [if there is more]. We’re only looking at one very small lens of this idea. It is possible to say, Well, actually there are other lenses.”

Troughton adds, “It made it a joy to work on knowing that it was finite and that there wouldn’t be this huge play for a recommission. But actually, now that we’ve finished series one, I think there absolutely should be a series two. First of all, Wyndham was making a sequel in his head. I don’t know how much I can give away about that, but his idea behind it was incredible. And something I’ve always thought about is, did the Cuckoos just go for this very small town? Was Midwich their only scoring place? So I pitched to David: Who knows what happened in Russia or India?”

“Who knows if there are other countries that have them and haven’t told us,” Farr adds. “We all made it with the absolute clarity that we were doing this story. That’s how you have to do things. When you finish it, you look at it and see potential seeds for something else.”

Mansha Daswani is the editor and associate publisher of World Screen. She can be reached on mdaswani@worldscreen.com.
Previous Netflix Greenlights Welcome to Eden Season Two
Next Paramount+ Sets Final Season of The Good Fight 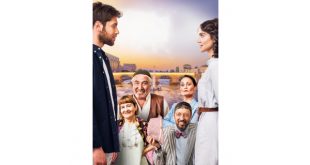 Distributor MISTCO has added the new Turkish drama Balkan Lullaby to its library and is set to launch the series at NATPE Budapest.