A murdered tourist. A 30-year-old detective forced to leave the Reykjavik police force and return to her small hometown and try to reconnect with her abusive mother. A series of deaths that weren’t accidents. And the eerily scenic black sands desert in Iceland. These elements are the backdrop to the Icelandic TV drama Black Sands. Actress Steinunn Ólína Þorsteinsdóttir talks to TV Drama about the series’ themes; Icelandic writers’, directors’ and actors’ desire to tell unconventional stories; and the country’s vibrant production industry and support of gender equality. 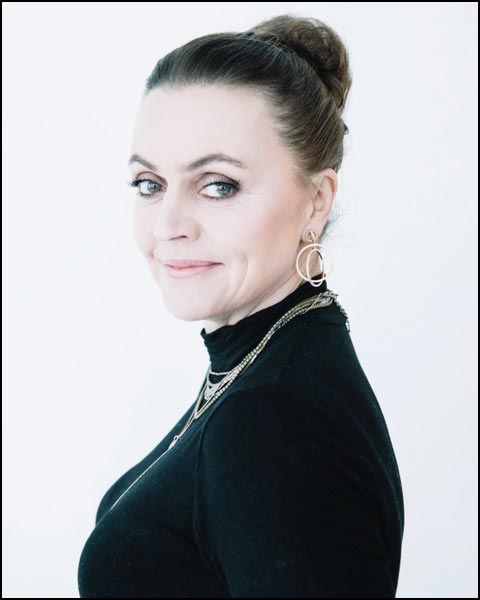 TV DRAMA: What appealed to you about the project Black Sands?
ÓLÍNA ÞORSTEINSDÓTTIR: What appealed to me was to work with Baldvin Z [director Baldvin Zophoníasson] because he’s unconventional. He’s not scared of going out of the box. We’re seeing so many detective series that are formulaic; all of them are a bit the same. There are different settings, different characters, but the market demands the same kind of TV series. We’re all somewhat sedated in that way—audiences and actors alike.

So I’m always happy to work with Baldvin because he refuses to go along with convention: [There have] to be so many cop scenes, so many dead bodies, so many naked women. He fights that. He also has a deeper message to convey, so that’s always interesting. In Black Sands, it’s toxic relationships and toxic families, which are a special interest of Baldvin’s! That is what was exciting. And the role I play, the mother of the lead character, was a blank canvas when we started, but with Baldvin, you always have the opportunity of being very creative. We conjured up this woman together, and it was such fun because I didn’t want her to be any old mum. I wanted to be a parent of my generation, kind of an old punk rocker or someone who has become stuck at the age of 20 because of the shitty life that became hers. That was a lot of fun.

TV DRAMA: What are some of the themes that the series explores?
ÓLÍNA ÞORSTEINSDÓTTIR: I believe Black Sands is very true and authentic to Iceland. We’re talking about a very incestuous, small community, where everybody knows each other, which makes things really complicated in terms of an investigation. This is the truth of Iceland. Everybody is interrelated, even through our politics. It’s impossible to be incognito in Iceland, and it’s even impossible to do something without it affecting someone you know closely or a family member. So the complexity of something happening in a community touches everybody.

TV DRAMA: Is another theme the debate of whether human beings are destined to be the individuals they were raised as, or can they overcome some of the trauma they experienced?
ÓLÍNA ÞORSTEINSDÓTTIR: I think some people are lucky. Through their surroundings and life experiences, they get the audience they need from somebody that sees them so they may prosper and flourish. A lot of people are subject to difficult childhoods or authority figures at school who make them feel like losers from a very young age. It only takes that one person to see the opportunity in somebody or see their talent for the person to grow. It doesn’t need to be a parent. It can be a teacher or a neighbor who can save a person. The lead character in Black Sands, the detective Aníta, had a bad hand from the beginning, so she makes a lot of bad choices. She hasn’t had adults who are role models.

TV DRAMA: Tell us about the character you play, Elín. Is it more challenging to play Elín than a character like Gabríela, a detective in Case?
ÓLÍNA ÞORSTEINSDÓTTIR: No. Elín is just a part of me that thankfully never got to be! I’m just a more privileged person than she is! I think we all have these kinds of people inside of us. That’s why it’s important to tell the stories of people who are unfortunate in life because it can be a close call—make or break what happens to you in life.

TV DRAMA: Had you already worked with Aldis Amah Hamilton, who plays Aníta and is one of the creators and writers of the show?
ÓLÍNA ÞORSTEINSDÓTTIR: Not to this extent. We got to know each other during the shooting of the series. It was an absolute joy. She’s full of energy, and she’s very intelligent and talented. I am in awe that she has gotten her first show on its legs so early in her career. She’s shown great talent as a writer and creator, but she’s also a very good actress.

TV DRAMA: From a viewer’s perspective, it seems as though the backstories and development of the characters in Black Sands are as important as the plot, maybe even more so.
ÓLÍNA ÞORSTEINSDÓTTIR: I think we were all trying to stay away from stereotypes. Baldvin makes demands on the audience and gives them something to think about. You cannot quietly know from the get-go, Oh, that’s the police, that’s the murderer. Baldvin doesn’t want to make it easy. He wants us to stop and question. And the behavior of Aníta as the hero of the story in the first episode is very unconventional for a hero; she’s not even that likable. And you’re wondering, What’s she all about? That makes it interesting for me because if she’s just a beautiful young woman who’s going to solve the crime, what’s the fun in that? We’ve got tons of those TV shows. It’s far more interesting that we start to think about why people behave like they are behaving. We have to continue telling interesting stories and breaking rules.

TV DRAMA: You’ve had a lot of experience in theater. What different challenges and satisfactions do theater and television offer?
ÓLÍNA ÞORSTEINSDÓTTIR: I was raised in the theater. My mother worked in the theater, and I’ve been acting since I was a kid. I really love working in the theater, and I’ll admit I love rehearsing. I love rehearsals very, very much—that time when you are with a group of other actors and you’re exploring stuff. That’s the most fun part of it, getting the opportunity to not be yourself. It’s really overrated to be yourself! It’s much more fun to be somebody else!

On the other hand, you do all the groundwork before you go on set in TV and film, and when the director is satisfied, it’s no longer in your hands. You know you’ll never repeat it, and you know that from now on, it’s in the director’s and editor’s hands to do whatever they want with your performance. I don’t know if I like theater over TV or vice versa. It’s just a very different world. It all depends on the actors you’re with and the director you have. If there is a consensus of working toward a goal that everybody can put their minds to, that’s a delicious setting and a privilege at that.

TV DRAMA: There is a lot of talent and skill in the Icelandic television industry. It also offers quite a lot for international producers.
ÓLÍNA ÞORSTEINSDÓTTIR: We have at least two or three big service companies here, and they are very busy. We have a lot of big movies coming into the country and shooting parts of their movies here. Our industry personnel have gotten so brilliant in the last ten years because they’ve had the opportunity to work so much. I don’t remember a time when we shot more films and television than we have during the last two years of Covid. Somehow, we managed to do that. That is brilliant, and Icelandic TV series have started to travel, which is great.

I think we have stopped trying to follow the Nordic noir trend. We’re getting more confident in telling our own stories. I believe stories in TV travel better worldwide if we’re authentic and telling real stories because, in the end, it’s people and their relationships that will travel. Fortunately, we have stopped trying to create American TV series. I think we’ve found that we have to be truthful to who we are here, and that will be our strength. We have tons of good series that came out this year, which I’m sure will do really well. We have started documenting eras in the history of Iceland that I am sure foreign audiences will love because they are universal stories.

TV DRAMA: I’m reading Iceland’s First Lady Eliza Reid’s book, The Secrets of the Sprakkar, about gender equality in Iceland. Do you find there are sufficient opportunities for women in front of and behind the camera?
ÓLÍNA ÞORSTEINSDÓTTIR: I think every actress in the world will acknowledge that it’s been the era of the middle-aged actress. Producers and buyers have realized that women watch TV! And women want to see stories about other women. They have also found out that they want to see ordinary faces on TV. We’re not all glamorous and beautiful; we’re a bouquet of mad faces! I’m 52; it’s been a great time for me, and I can see from my friends in England and my actress friends worldwide that we’re all working now, which wasn’t the case 30 years ago. At the age of 50, you were getting all the small parts in the theater, but there were scarcely any movie or TV roles. So that’s good. We have very good female directors and prominent young female directors doing fabulous things here in Iceland. On the production side, we have a lot of women working here. And there are a lot of female writers writing for film and TV.

TV DRAMA: You’ve written, you’ve acted, produced, you’ve hosted a TV show and you’ve raised four children. I won’t even ask how you’ve been able to do all that! Is there any area you enjoy the most, and what upcoming projects are you working on?
ÓLÍNA ÞORSTEINSDÓTTIR: I love to do a lot of varied stuff. I ran a newspaper for almost eight years; I loved doing that. I’m a news-aholic, so I love working in news. I took 13 years off from theater and didn’t do any acting for 13 years, so it’s fun to be back doing that. I really don’t have a preference; it all depends on what I’m doing. I’m happy with what I’m doing now. I’m working in the National Theatre on My Brilliant Friend, with the fabulous world-renowned director Yaël Farber from South Africa. I’m also rehearsing a new Icelandic play by a young playwright. It’s a terrific play, a satire on Icelandic society. I love cross-stitching. I love caring for my cats and children! I just like being busy, I guess! 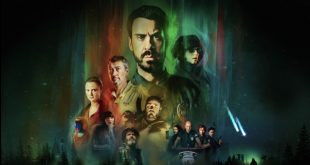 HBO Max Picks Up Warner TV’s Visitors for the U.S.

Visitors, the first original production from Warner TV in France, has been acquired by HBO Max in the U.S.