NEW YORK: Téa Leoni tells World Screen how she was attracted to the quality of television’s long-form storytelling and intrigued by the prospect of playing Elizabeth McCord, a former CIA analyst who left the agency on ethical grounds and is tapped by the President to be Secretary of State in Madam Secretary.

WS: What attracted you to television and to Madam Secretary?
LEONI: I was ready to do a television series because my kids had gotten to the age where they can turn their own key and make their own breakfast in the morning, and I thought, they’re ready. I was curious about television because the level of work being done, from the cinematography to the commitment from every department, is in many ways more incredible than in film. Television used to be more like film-light and it’s not that way anymore. And I was certainly attracted to the idea of living with a character beyond the beginning, middle and end that takes place in two months on a film. There is something about playing a character when you don’t know the middle or the end. I was looking forward to that opportunity. I had never done that. I had done a sitcom, but sitcoms are a little bit different.

Madam Secretary came at the 11th hour of me looking around and thinking about a commitment to a different [project]. If they had been asking me to play a seasoned secretary of state I wouldn’t have been as interested; actually they wouldn’t have asked me to begin with! But I liked the idea of a rogue, fish-out-of-water woman. I either made up or identified right off the bat with the fact that Elizabeth was hopeful. That was her dirty little secret. I like that dirty little secret. There are a lot of powerful women on television who have really fun, fetishistic hobbies and addictions! That’s fun and kicky and I’m loving a lot of these performances and the characters that are being created. I also like the opportunity to play a woman who is enough just as she comes, without any of that. We haven’t explored that, it’s as if a bunch of TV executives felt we needed to spice this up. I like the idea that Elizabeth isn’t particularly extraordinary. She’s smart. She’s doing her best as a mother. There is something about her ordinariness that I like. That’s not quite the right word; I’ll think of a better one.

WS: It’s interesting that you say that. Elizabeth is totally a good person, but she’s fascinating. Is it more difficult to take a person who is “good” and make them interesting than playing a badass?
LEONI: I think in a way it is, because the idea of lack of character makes for great drama! It’s spicy, it’s shocking, it’s titillating and there are no boundaries, there is a freedom.

One of the reasons I took this job, oddly enough, was because of the Henry character [Elizabeth’s husband]. I was so impressed that we would have a man on film that could stand alongside a very powerful woman and not derange himself or her in the process. I don’t think we’ve seen a lot of men like that. If I were a man I would be greatly offended by a lot of the depictions of men on television, mostly in that they can’t seem to be able to stand behind or alongside a powerful woman. I like the idea that they would have—shocker of shockers—a strong relationship where they hold each other accountable. Where they work it out; they figure it out. I’ve played the hyper-neurotic, not-so-gracious characters. I’m particularly thinking about Spanglish. That was kicky because there is compassion there. As an actor, you’ve always got to have compassion for your characters, good or bad. One of the coolest things happened a couple of weeks ago. A woman walked up to me and said, My 10 year old now wants to go to law school and get into politics because of you on Madam Secretary. And I loved that! 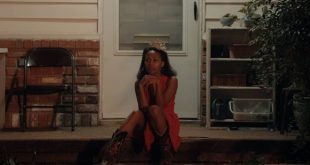