Mansha Daswani is the editor and associate publisher of World Screen. She can be reached on mdaswani@worldscreen.com.
Previous BroadbandTV Founder & CEO Tapped for IBC2016 Keynote
Next VIMN Rolls Out BET Play Internationally 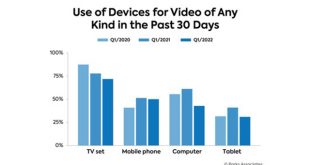 According to Parks Associates, consumers have maintained recent increases in the amount of time they spend watching video on their mobile phones, while time spent consuming video on a TV set, tablet and computer continues to decrease.