World Screen Weekly looks back at the biggest media stories of 2014 Of all the shifts we saw in the media business last year, perhaps none were as transformative as the wave of merger-and-acquisition activity that took place throughout 2014, at every level of the content business. In the pay-TV arena, Comcast announced it was … 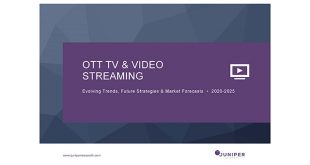 Juniper Research is forecasting that there will be nearly 2 billion subscriptions to on-demand video services in 2025, a 65 percent increase from the end of 2020.