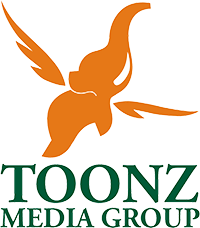 Toonz Media Group is a 360-degree media powerhouse with over two decades of unparalleled experience and one of Asia’s most active animation production studios with over 10,000 minutes of 2D and CGI kids and family content produced per year. Toonz was established at a time when commercial studios for animation in India were unprecedented. Today the company has emerged as a formidable name in the kids' and family entertainment segment, with studios and offices across the world, catering to almost every aspect of the media industry, including animation, Vfx, AR/VR, gaming, live action and content distribution. In 2014, Toonz acquired Imira Entertainment, a leading Spanish production and distribution company specializing in kids' and youth programming with a focus on European, U.S., Latin American and African markets. The group’s additions also include Toonz New Zealand and Toonz Turkey, which focus on production and distribution in the Australasian and Middle Eastern, markets, respectively. In 2019 Toonz acquired majority stakes in the Emmy Award-winning Irish studio Telegael. Toonz has collaborated for international and award-winning projects with the world’s leading entertainment studios, channels and networks, including Marvel, Nickelodeon, Turner, Disney, Netflix, Dreamworks, Lionsgate, 20th Century Fox, Paramount, Sony, Universal, BBC, Amazon, Google, Hulu, HBO and Exodus Film Group. Toonz is part of the multi-billion-dollar Comcraft Group, which has its European headquarters in London.

Charlie and the Interviewer of Things
+

Aliens in My Backpack
+

Aliens in My Backpack
+

Charlie and the Interviewer of Things
+

(Kids 3-7 adventure) A girl-centric property where fantasy and nature come together to weave magical adventures.