A writer, story and branding consultant, creative writing instructor and speaker with over 25 years’ experience, Luhn has created stories and characters at Pixar Animation Studios and for The Simpsons. His clients have included companies such as Target, Procter and Gamble, Adidas, Sony, Mattel, Facebook, Charles Schwab, Microsoft, Warner Bros., Google, Salesforce and Disney.

Honourable Prime Minister of Jamaica Andrew Holness will open this year’s KingstOOn, which will host its first virtual staging from April 21 to 25. The prime minister will be joined at the event opening by Tahseen Sayed, World Bank country director for Caribbean countries, Latin America and the Caribbean region. The YEDAI Project is funded by a $20 million World Bank loan to the Government of Jamaica for training young Jamaicans in the digital and animation industries. This year’s KingstOOn will also have a Film Festival featuring an array of diversity-centric animated films from the Caribbean and the rest of the world, a business exchange forum and its signature Pitch Boot Camp and Competition for the five Caribbean-based front-runners in the Best Concept category.

Margery Newland, project manager for the youth employment in the digital and animation industries, the host agency for KingstOOn, said: “It is indeed an honor to have the likes of Matthew Luhn at our KingstOOn opening. This has been made all the more special, with a welcome by the Honourable Prime Minister himself, who has emphatically articulated the importance of the creative industries, and animation in particular, to the generation of employment opportunities for our nation’s youth.”

Chelsea Regan is the managing editor of World Screen. She can be reached at cregan@worldscreen.com.
Previous WarnerMedia Outlines Kids’ Leadership Team for EMEA
Next 9 Story’s Vince Commisso Set for TV Kids Summer Festival 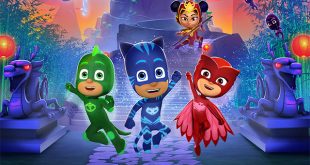 Entertainment One (eOne) has closed a deal with Clan TV in Spain for seasons one and two of PJ Masks.