Leading producers and distributors discuss how best to incorporate science, technology, engineering, the arts and math into kids’ TV shows.

Among the handful of silver linings from the past two years of pandemic-era disruptions, the reemergence of a robust educational core for kids’ TV shows has been a boon for the industry at large. Indeed, distributors who were lucky enough to have curriculum-based shows on their slates found a wave of new opportunities as school closures began to hit—and that demand has continued even as kids’ lives have in many markets begun returning to some degree of ordinary.

“The demand rose for STEM shows during the pandemic, with virtual learning a global requirement, which has helped to commercialize these types of series and made them more appealing to partners,” says Alison Taylor, the director of distribution and business development at Aardman.

“There is a lot of demand,” agrees Dominic Gardiner, the CEO of Jetpack Distribution. “Many broadcasters are already explicit with that demand and have been that way for a long time. Even those who have experience doing edutainment shows stepped up even more. There was demand from parents as well. And the industry reacted quite quickly. Even commercially minded broadcasters would have noticed it was very popular. At the end of the day, they’re all in the business of eyeballs. So if edutainment works, then why not do more of it?”

Other factors are happening in the background, notes Arne Lohmann, VP, junior, at ZDF Studios, such as NASA’s Moon to Mars initiative, which aims to send humans to the planet in the 2030s. “Space and understanding Earth’s place in the universe are major areas in the science education curriculum,” says Lohmann on the importance of a STEM (science, technology, engineering and math) foundation for kids’ TV shows. “This is most important in primary school, when students decide about the value of studying science. Seventy-five percent of the fastest-growing careers today require at least some STEM skills. Inspiration matters.”

SPECIAL ED
And to be inspiring, STEM/STEAM-based shows need to get a lot of elements spot-on. Taylor mentions the basics of “strong and engaging” characters alongside “educational elements that are seamlessly integrated into the stories and touch upon characters’ traits and wants. This makes the educational side for kids not only easy and fun to digest, but also triggers their engagement with the characters beyond the show itself.”

Even when you do have all the elements in place, Jetpack’s Gardiner reports that sometimes when you’re pitching a STEM show, “your idea can be compared to pre-existing ones quite quickly. Once you even utter the word STEM, they may say, we have a STEM show! It’s frustrating because you know the world can exist with more than one STEM show. There’s almost that quota people have in their heads. It’s not strictly related to the audience’s appetite. And some channels could have edutainment all day. You have to be very distinctive. That point of difference needs to be clear in any educationally driven series.”

It also helps to have educators and experts on board, as SLR Productions did as it was making Space Nova, ZDF Studios’ lead STEM-based series, which features “rich science-learning sequences designed to target different learning ages and key science content,” Lohmann says. “STEM involves critical thinking and problem-solving while also encouraging creativity. When taught at a young age, STEM encourages children to solve problems and think outside the box so that the skills they learn remain with them throughout their lives. Space Nova’s intended audience is 5- to 10-year-old girls and boys. The newly formed Australian Space Agency has become an anchor for the audience to see an aspirational show about Australians in space. The series takes real science as a story starting point and expands it into a fantastical story encouraging questions like ‘what if.’”

SPACE AGE
The series does that through the adventures of siblings Jet and Adelaide as they venture through space with their parents looking for alien life forms. “Entertainment is always at the core of creating shows like Space Nova,” Lohmann adds. “However, combining STEM, especially in space, with science allows for the audience to see STEM in an entertaining way. We explore all kinds of areas: What is life like on other planets? What would it be like to have a robot as your best friend? How can AI and humans live and work together? What are sound and light like in space? The characters are also linked to key STEM themes and careers that you would find if you were in space.”

Jetpack’s Florida, meanwhile, focuses on the E in STEM, following a little girl living with her aunt, an ex-NASA scientist who runs a GEM (Gadgets of Everyday Marvel) shop. “Kids learn about where the item came from, what it was used for and how it works,” says Gardiner of the show, which hails from Paper Owl Films. “The emphasis is on storytelling, but the ‘how it works’ bit educates kids about engineering and science. There is also a great focus on imagination-based science and how you can invent a new tomorrow. It’s a show that can excite kids about engineering—the fun bits, like how magnets work and what a pendulum is; the real-world applications of science. For kids today, there’s no information you can’t find. But the application of things in the physical world is something that kids probably don’t interact with in the same way as when we were growing up. Toys were based on scientific things. Now everything just comes out of the screen. We wanted to have principles of coding in the story­telling. We also wanted to match that with more classic science. We have new tech and old.”

BY THE NUMBERS
Aardman is touting Alphablocks and Numberblocks, which “help kids better understand (and love!) math, phonics and literacy,” Taylor explains. “Numberblocks and Alphablocks are unique in that numbers and letters come to life and help children learn in a fantastically visual way.Kids are learning without realizing they’re being taught, which is the ultimate goal of the educational shows we produce and distribute at Aardman.”

Aardman’s STEM-based shows, Taylor adds, were “developed in conjunction with the relevant educational experts. This, alongside the strengths the animation studios bring to the development and production in terms of characters, story and humor, really help to achieve the perfect educational-entertainment output.”

Taylor also mentions the importance of edutainment shows promoting the arts, referencing Aardman’s upcoming rollout of Pop Paper City from LoveLove Films, “an adventure arts and crafts, ‘view-and-do’ series that inspires kids to join the characters in creating objects from paper as featured in each episode,” she says.

Jetpack, meanwhile, is unveiling Alice’s Diary. “The strapline is: Understanding the world through art,” Gardiner says. “Alice’s wonder, inquisitiveness and unique view on the world are shared with the audience through her off-beat, engaging conversations with her mum. And as Alice talks, she draws, and her pictures become a captivating visualization of what she’s thinking. It’s animation about art. It’s one of those shows you’re drawn to because it’s so beautifully designed.”

The show, like many edutainment properties, targets preschoolers. Indeed, once you get into older kids’ demos, executing on a STEM- or STEAM-based curriculum can become much more challenging.

“To follow a curriculum, you have to have a broad approach because not all kids develop at the same rate,” Gardiner says. “Some subjects would be tough to get across in a story. It becomes factual. For younger kids, you can have a balance of story and education. And entertainment is the tone of it; it envelops it all. You can be completely madcap and irreverent and still have facts in there that kids can get out of it. When you get more into a factual show, the older kids appreciate it, but it really is education, and the entertainment gets dialed down. You have to be honest with older kids: This is a factual show that will help you with your schoolwork. The prominence is always the younger end. I’d say 95 percent of preschool shows have some loose curriculum.”

Lohmann at ZDF Studios emphasizes the importance of science—and wonder—in kids’ shows in general across a range of demos. “Scientists still have so many mysteries to solve when it comes to the universe,” he notes. “Their discoveries will help us to improve our everyday lives and better understand our planet and its role in the universe. Fostering a passion for space and space travel in children will lead to discoveries in the future that can benefit us all. Programming with STEM is important for audiences of all ages, to learn, inspire and be aspirational.” 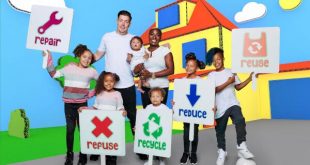 Saving the Environment, One Kids’ Show at a Time

Children's media execs discuss the important role that the TV industry plays in spreading awareness about the climate crisis and the boom in environmental and nature-based programming for young ones.