The report entitled Examining Children’s Animated Television in Canada, published by the Children’s Media Lab at Ryerson University’s FCAD, has revealed its findings on the representation of diversity and inclusion in Canadian children’s and youth animated television content.

While the report found an increase in portrayals of people of color (POC), it also indicated that Indigenous characters remain largely underrepresented, along with other ethnic minority groups. The report further exposed a gap in equal representation of gender, as well as depictions of neurodiversity and disability.

The research outlines the implications for young audiences and offers suggested practices for industry and content creators who want to positively enrich and advance children’s media content. The new report is a follow-up to the Landscape of Children’s Television in the US and Canada, a collaboration between Ryerson University and Rutgers University, distributed by the Center for Scholars and Storytellers at UCLA in Spring 2019.

The Children’s Media Lab will follow up on the latest report with a Virtual Think Tank Event on March 10.

Colleen Russo Johnson, Ph.D., co-director of the Children’s Media Lab, adjunct professor at the school of creative industries at FCAD and co-founder and chief scientist of the OK Play app, said: “I’m excited to report that we’ve seen tremendous shifts in racial diversity in human animated characters with people of color representing half of all main characters. But I’m disappointed to say that we still have a long way to go in our gender representation, with males outnumbering females nearly 2:1. And characters with disabilities virtually absent.”

Johnson added: “Children’s television has the incredible opportunity to influence children’s views of themselves and others. We often focus on what we are portraying, but equal attention must be paid to what we are not showing. Lack of diversity on screen, be it race, gender, or disability, is damaging. It’s imperative that children see themselves accurately and positively reflected in the shows they watch. Children are our best hope for a more inclusive future, and we can help nudge them in the right direction through the content they consume.”

Kim Wilson, co-director of the Children’s Media Lab and director of OneFish TwoFish Consulting, said: “Canadian children’s content producers are already recognized as major players globally. Research like this allows them to continue to think about equity and to challenge themselves to create content that addresses disparities like gender bias, even in non-human characters like animals and monsters. This is something that content creators can easily act on.”

Marney Malabar, director of TVOkids, said: “TVO is proud to have participated in this innovative research project. As producers of animated shows for kids, we know how important it is to create multi-dimensional characters that reflect the diversity of our young viewers and make them feel heard and empowered.” 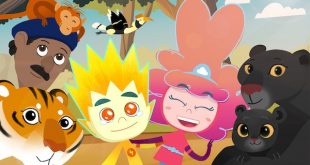 MeteoHeroes Season Two in the Works