Buck and Buddy to Bow on Cartoon Network Japan

Buck and Buddy follows two mischief-making insects who must learn to live, compete, play and survive in the wastelands they call home. The 60×5-minute series, distributed by Jetpack Distribution, is slated to make its debut on Cartoon Network in Japan later this year.

Chelsea Regan is the associate editor of World Screen. She can be reached at [email protected]
Previous CAKE Sends Treasure Trekkers Around the World
Next Tainá and the Amazon Guardians Notches Up Deals 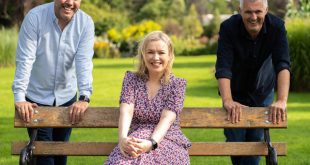 Chris Dicker, Lena Byrne and John Reynolds have teamed up to launch a new venture, Sow You Entertainment, a production company that acts as an original-ideas incubator, specializing in children’s and family content.