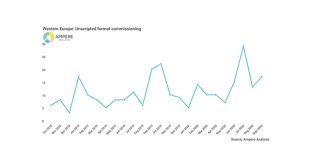 According to Ampere Analysis, Western European commissioners are driving a new boom in format production, fueling an uptick in commissioning of formatted shows in the last year.