According to Ampere Analysis, Western European commissioners are driving a new boom in format production, fueling an uptick in commissioning of formatted shows in the last year.

While format activity is still largely driven by linear broadcasters, streamers are increasingly turning to formats for new original production. Over the past year, linear channels globally have commissioned 263 shows based on formats, with streamers adding a further 36.

Ampere Analysis asserts that streamers are set to turbo-charge the format boom. For one, Netflix has been ramping up its unscripted slate by replicating formats across multiple territories. Ampere’s analysis has shown that Netflix has been exploiting its expanding presence in localized production in order to target international markets with its original unscripted formats on a larger scale.

Alice Thorpe, analyst at Ampere Analysis, said: “Our recent research has shown that Netflix is beginning to invest in its original unscripted formats on an industrial scale. It’s now leveraging what is essentially a global studio infrastructure, which means they can push out carbon copies of their originals localized to different territories while keeping costs down. As Netflix is still a relatively new entrant into the unscripted formats market, it will take some time for it to see its investments pay off; however, it has already seen some reward, particularly when new formats are coupled with a change in release strategy. Netflix’s experimentation with its release strategy for the reality dating show Love is Blind (which is being remade for the Brazilian market) helped secure it as the second most popular show globally on the platform in its finale week. It’s likely we’ll see increased experimentation with Netflix’s release strategy of its unscripted formats in the future.”

Analyst Olivia Deane added: “As a global lockdown triggered a strategy change for commissioners, SVOD providers have turned their focus to unscripted content, which has been easier to make within COVID-19 constraints. However, despite an uptick in unscripted content, subscriber preference for scripted titles has remained strong. SVOD players face a delicate balancing act if they want to continue producing high volumes of original programming while meeting subscriber appetites for high-quality scripted content.”

Kristin Brzoznowski is the executive editor of World Screen. She can be reached at [email protected]
Previous Inter Medya Formulates Formats That Can Travel
Next Germany’s Seven.One Entertainment Group Picks Up Slip Show 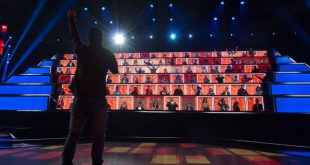 All Together Now Commissioned in Portugal

Shine Iberia Portugal, a Banijay Iberia company, has been commissioned by TVI to produce a local version of the singing format All Together Now.