Home / Columns / A Note from the Editor

A Note from the Editor

Putting together a 600-page magazine takes an awful lot of planning—for months. And in a business where change is seemingly constant, staying ahead of the curve when it comes to rapid-fire shifts in how content is consumed and monetized is no easy feat. I’m pleased to tell you that we’ve achieved that for this remarkable MIPCOM edition. As the world becomes consumed with dealing with “fake news” and discerning truth from fiction, gracing our front cover is renowned journalist Christiane Amanpour. Amid the rising importance of managing and enticing top-name talent in front of and behind the camera, we have an in-depth piece by Elizabeth Guider on how networks, studios, distributors and producers are upping their games in what has become an arms race for the best writers, directors and actors. We also feature interviews with ten leading television stars on what appeals to them most about the medium today. As transformative M&A activity continues to reshape the business, we hear from Bob Bakish on the benefits of the impending Viacom-CBS Corporation merger, Craig Hunegs on how Disney Television Studios is managing three production labels following the Disney-Fox transaction, and Hugh Marks on the Nine-Fairfax deal creating Australia’s largest media company. The streaming wars continue at pace, and this edition has Bob Greenblatt on the upcoming HBO Max direct-to-consumer service and James Farrell discussing Amazon Studios’ strategy for international originals. We also feature an interview with Charlie Collier discussing the positioning of the newly independent FOX network, Patrick Tillieux on ten years of OSN, and so much more.

You can see the World Screen MIPCOM edition here.

A full rundown of what’s in our regional and genre-focused MIPCOM editions is below. Follow the links to access our digital editions online, or get the Issuu app for iOS and Android so you can read them on the mobile device of your choice.

We have also published new editions of the TV Kids Guide and the TV Drama Guide.

Don’t forget to pick up your copies at the Palais, or in a number of hotels in Cannes.

Mansha Daswani is the editor and associate publisher of World Screen. She can be reached on mdaswani@worldscreen.com.
Previous Got Talent?
Next MIPCOM Spotlight: Voxx Studios 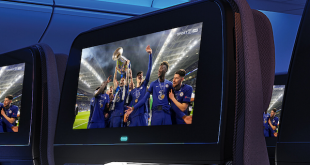 IMG-owned Sport 24 has renewed its agreement with UEFA to broadcast the UEFA Champions League and UEFA Europa League for three more years on its 24/7 live sports channel for the in-flight and in-ship industry.