Even though they take time, planning and precise alignment of interests, co-productions remain a viable way of bringing projects to the screen.

Inventiveness and innovation are traits most often associated with crafting storylines or designing animated characters. However, they are increasingly necessary for the financing and dealmaking side of the kids’ content industry. In navigating the evolution of the sector, producers have had to become creative in the business models they structure and the partnerships they form.

Despite all the change, one factor has remained constant—children want entertainment, even more so during the pandemic when so many have not been in school or participating in extracurricular activities. And kids demand engaging stories and high production values, and these come with a high price tag.

Pierre Sissmann, the chairman and CEO of Cyber Group Studios, explains that his company prefers to produce on its own when possible. “Because we are a French studio and we are supported by the French government and have subsidies and tax credits, the best model for us is to create something that is 100-percent original. You want to retain a maximum amount of rights and creative ideas and be a master of your own destiny. That is not always possible, so sometimes you co-produce because you need to or because someone is coming to you.

“Having said this,” he continues, “the preferred way of co-production is always to do it with one entity. This has evolved because, over the years, the market has been evolving. We have found that we can co-produce with three entities. For instance, Tom Sawyer was a Franco-German-Italian co-pro. Nefertine on the Nile was France and Italy and it even has other territories in it. We are executive producers, but we are [one of] three partners in France on Droners. So new models appear all the time. It is more difficult because you have to align more interests. The math and the model are more complicated.”

Despite the complexities and the labor-intensive nature of jointly financing and producing, for many years, a popular co-production formula has been two commissioning broadcasters combined with funding possibilities and presales to close the gap.

REINVENTING A CLASSIC
“The classic model as described has proven its worth,” says Martin Krieger, the CEO of Studio 100 Media. “Naturally, it varies in terms of the weighting of the individual financing aspects, but it is still there as a basis for financing via broadcasters, funding, tax incentives and presales. The players involved vary, too, looking at streamers and other commissioning partners, but the known financing sources remain the same. We are constantly monitoring the possibilities and want to use the best possible constellations for our productions and co-productions.”

“I’m still really keen on the old-school model because I like to own the intellectual property and also to keep the distribution rights,” says Genevieve Dexter, the founder and CEO of Serious Lunch and CEO of Eye Present. “If you go with a VOD model, there’s not a lot left after that contract. So, I’m still keen on the two-broadcaster international co-production, but I’m finding that there are more co-producers required now to try to make the cake fit. You used to be able to do it with two countries, and increasingly, you’re doing it with three.”

Cyber Group’s Sissmann stresses the critical importance of ensuring all partners are on the same page before starting production: “The most important thing is to not only think about your interests but also about the interests of others. [You can] eliminate disagreements in the middle of production if you align interests in the beginning. That can make things go faster and time is of the essence when you co-produce. Each delay costs money, and each delay ultimately upsets your final client.”

THE RIGHT MIX
Knowing at the outset what all the components of a project could be make completing the co-production less complicated.

“The traditional model does still seem to be the leading option, even if there are more ways to finance the production of a show these days,” says Matteo Corradi, the president and CEO of Mondo TV Group. “However, it is not just a matter of how you finance your show. Your choice also depends on what expectations you have of your IP. If you need to support consumer-product programs, broadcasters and big chains still play a primary role. That’s why independent producers need to take what you might call an opportunistic approach. They must try to be flexible to benefit from the different chances available in the market. In fact, creativity may not just be part of developing content but can also play a role in implementing business strategies!”

Identifying the core attributes of a property helps producers find partners and the right home for a show. As Jon Rutherford, the president of Boat Rocker Studios, Kids & Family and Rights, says: “It goes back to what we as companies, as brand builders, are prepared to do to support a brand. Traditionally, it was always great to be on a very prominent linear broadcaster that had the eyeballs and the visibility. The reality is the money is just not spread around the same way it once was.”

“Working with streamers is more of a realistic way of getting shows sold than ever before,” says Rutherford. “So it does put the emphasis back on us as a company. If we want to build a brand or franchise around this, what are we doing to support that? How are we adding more eyeballs around the streaming visibility, whether it’s through strategic negotiation around second windows, additional publicity and promotion or brand-activation events? It’s the always-on approach to digital and YouTube and other elements that you can bring in. It’s costly; it’s time, it’s resources, it’s money, it’s people.”

As Mondo TV’s Corradi explains, streaming services “have huge budgets, but these will come with the demand for holdbacks. In many cases, there is a shifted window for consumer-product revenues that starts only with free-to-air broadcasting.

“Of course, we believe platforms are good for spin-offs and subsequent seasons of a show as they allow kids to binge-watch as much as they like,” Corradi continues. “However, in our experience, the first boost on the consumer-product side comes from the multiple reruns on free-to-air channels. Platforms are learning to release the shows at a more gradual pace as it is not worth their while to burn through shows too quickly. Thus, we are now seeing releases of seasons made up of small batches of episodes at a time.”

Frank Falcone, the president and executive creative director of Guru Studio, notes, “If we feel a show has legs and several seasons under it, we sort of keep it away from the streamers because we’re looking for better models. It takes longer. You can potentially miss your opportunity if it takes too long to put the financing together. So you are always weighing the risks of putting it all in with a VOD and getting your commission going sooner and getting into production. You have to respond based on your needs and the needs of the show.”

WINDS OF CHANGE
“I remember when Nick UK used to put up 25 percent of your budget just for the U.K. Now you’re looking at that across multiple territories,” says Serious Lunch’s Dexter. “We have to work harder and harder to find the revenue for each co-production. I can understand the temptation if an SVOD channel says, ‘I want to fully fund your show.’”

Falcone argues that streamers’ propensity for renewing shows season by season, instead of making a long-term commitment, is not a way to build a brand. “Your kids’ audience ages up quickly and, if you don’t get more content in front of them, you lose your opportunity. It’s always challenging to work in a model that gives you a lot of money up front and then waits a long time before they give you more.”

Despite the effort involved in getting a co-production up and running, many are being done and in several different ways. At Studio 100, a recent co-pro is FriendZSpace, with Flying Bark Productions, its studio in Australia, together with T&B Media Global in Thailand. Worldwide distribution is handled by Studio 100 Media. “We are currently looking for further partners to come on board to close the gap,” Krieger says.

Studio 100 has animation studios based in different countries, and as Krieger explains: “We can use the various country models for our productions and allocate the productions accordingly. Here, too, new options are always opening. For example, we are currently active in co-productions with partners in the Canary Islands and recently, attractive new tax refund models have also opened in Italy.”

“On Grisù, we are working with a popular model: one commissioning broadcaster (ZDF Enterprises) and presales to another national leading broadcaster to close the gap,” says Mondo TV’s Corradi. “Also, thanks to our partnership with Toon2Tango, we have other different projects, like Agent 203, for which we are building a similar ‘traditional’ strategy. We’ve mostly worked with this model, which we believe grants shows greater longevity and helps build the consumer-products strategy, even when broadcaster budgets are shrinking as they try to finance more shows and producers. Agent 203 and Hey Fuzzy Yellow are among the first results of our partnership with Toon2Tango, the kids’ and family entertainment venture headed up by longtime television and movie industry experts Ulli Stoef and Jo Daris. It’s a partnership that promises to bring many more innovative new shows to multiple platforms and expand our reach in the international market.”

MIX OF MODELS
However, Corradi continues, “in the recent past, we’ve worked with other models. For instance, for VOD platforms, we’ve been keeping the VOD as a second window and rolling out the consumer-products strategy in the countries we handle directly and funding the shows just among co-producers without any particular prebuy or commissioning broadcaster on board. This is relevant for MeteoHeroes, a show where the editorial input from the co-producer—a weather forecasting center—was so strong that we did not feel allowing additional co-production on board would be worthwhile. In other cases, we have been able to fund the whole show by ourselves.”

“It’s really important to keep your business model wide and diversified,” says Dexter at Serious Lunch. “We talk about diversity on-screen; we need diversity in our businesses. If last year has taught us anything, it’s that we really have no idea what’s going to happen.” 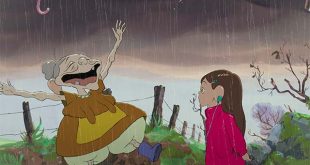 Dandelooo’s Mum Is Pouring Rain has been selected in the official competition at this year’s Annecy Festival.