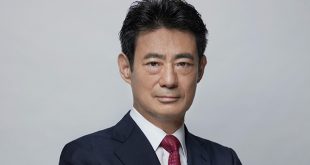 Akira Ishizawa has been promoted from senior executive operating officer to president and CEO of Nippon TV, which has established a new content strategy division.