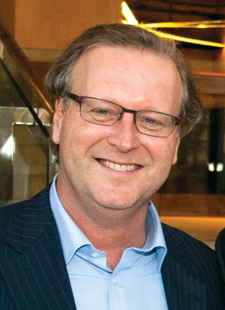 By Ricardo Seguin Guise
I love wine, and so do many of my friends in this industry. During the past 30 years, I’ve been lucky to have many wonderful dinners with interesting people, most of which were accompanied by superlative bottles of wine. But one of my business experiences involving wine nearly went disastrously wrong.
Anna and I had recently married, and when she became editor, we decided to raise the bar even higher on the level of executives we would interview for the magazine. Who could we interview that would showcase our editorial might and create an amazing amount of buzz? It was January 2001 and, at that time, there was one person whose fast rise and larger-than-life personality fit the bill perfectly:  Jean-Marie Messier. He took the reins of the sleepy French water-utility company Vivendi and quickly transformed it into a media behemoth by acquiring CANAL+. He then bought Seagram, the large distiller of alcoholic beverages, which also owned Universal Studios. He referred to himself in his autobiography as J6M (Jean-Marie Messier: Moi-Même Maître du Monde), which translates to Jean-Marie Messier: Myself Master of the World. I’ve met a lot of egomaniacs in this business, but nothing prepared me for that!
Anna and I were thrilled when we were told that Messier had accepted our request and that we would be interviewing him at the Seagram Building on Park Avenue. One year earlier, Time magazine had named the Seagram Building, built by Mies van der Rohe, the most important architectural achievement of the past millennium. (That’s right, 1,000 years!)
To prepare for the interview, Anna read Messier’s book and told me that he mentioned in it that his favorite wine was Château Ducru-Beaucaillou, a second-growth Bordeaux. I had a couple of bottles from the 1990 vintage and decided I should give him one after the interview.
On the day of the interview I was a bit nervous. It’s not every day that you meet a cosmic ruler in his magnificent palace. We arrived at the Seagram Building and took the elevator to the floor where the conference room was located. When the elevator doors opened, we encountered a huge wall filled with wine bottles. I began reading the labels: Château Latour 1945; Château Lafite 1953; Château Margaux 1928…there were hundreds of bottles of the most historic vintages from the most prestigious châteaux. I later learned that, besides being one of the largest distillers in the world, Seagram also represented the first growths of Bordeaux in North America. I was suddenly very embarrassed of the little bottle I had brought with me in a plastic bag. I was trying to find a place to dispose of it when the conference-room doors opened and we were ushered in. I placed the bag next to my chair and, a few minutes after the interview started, I accidently hit it with my foot, causing the bottle to fall. I was terrified that the bottle had broken and the spilled wine was now moving toward Messier’s expensive shoes, but I did not dare look under the table. It ended up that the bottle was intact and the interview went well. As we were leaving I mustered the courage to give him my present, which he graciously accepted.
The Seagram Building also houses the famous Four Seasons Restaurant, which hosts the finest wine-tasting events in New York City. At one of its Brunello tastings I had the good fortune to meet Richard Parsons, then the CEO of Time Warner, and, unbeknownst to me, the owner of a vineyard in Tuscany. His wine was one of those selected for the tasting, and we had a very enjoyable evening aided by delicious Italian wine. The next day, I wrote him a letter requesting an interview, and he promptly accepted it. I am not sure if the memories of that evening had anything to do with it, but Dick Parsons was the only head of a major media company who came to the reception area to greet us in person and bring us to his office. It was a very nice touch and we will never forget it.
During the span of my career I’ve met several people who decided to become winemakers. It is undoubtedly cool to tell your guests that you own a vineyard and that they are drinking your wine. But such romantic thoughts aside, most of these recently converted winemakers quickly learn that a successful wine business is inordinately time consuming and capital intensive. It is relatively easy to be an ordinary winemaker; it is exceedingly difficult and expensive to be a serious and awe-inspiring winemaker.
The same is true of publishing. It’s not easy to publish a great magazine. It takes a lot of effort from an ambitious team relentlessly in pursuit of perfection. As I reflect on our company’s history, sipping a glass of Burgundy, I must confess (in vino veritas) that we do encounter brief moments of weakness, when we feel that putting together such a massive edition (in addition to the three daily and nine weekly online newsletters) is just too overwhelming. Some­times we have our flashes of doubt and wonder if all the long hours and the personal sacrifice are really worth it. But when it is all over, the satisfaction of having once again created a truly memorable edition is extremely rewarding. So please open a good bottle of wine and join me for a toast as we celebrate 30 years of publishing excellence.
2015-03-30
World Screen
Share
Designed by HattanMedia.com
© Copyright 2020 WSN Inc. All Rights Reserved.
No part of this website can be used, reprinted, copied, or stored in any medium without the publisher's authorization.