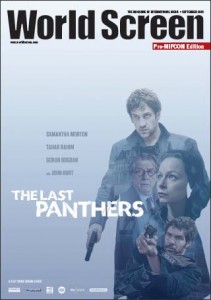 Hot Topics: Brave New Drama—Leading distributors discuss how they are serving the rising appetite for drama series across the globe; Who’s Watching?—A look at how broadcasters, audience-measurement companies and advertisers are dealing with how to track viewing in an on-demand world. Plus interviews with The Player’s Wesley Snipes, South of Hell’s Mena Suvari and Magnificent Century’s Halit Ergenç, as well as Red Arrow’s Jan Frouman, Tele München Group’s Herbert G. Kloiber and Herbert L. Kloiber, and Starz’s Carmi Zlotnik. There are also Q&As with Deutschland 83’s Jörg and Anna Winger and the talent in front of and behind the camera of A+E?Networks’ UnREAL and all3media international’s Partners in Crime.
View the digital edition here.
Digital edition sponsored by ITV-Inter Medya.

2016-01-27
Mansha Daswani
Share
Designed by HattanMedia.com
© Copyright 2020 WSN Inc. All Rights Reserved.
No part of this website can be used, reprinted, copied, or stored in any medium without the publisher's authorization.